HEAVEN CAN WAIT and REDS: Two of Beatty's Best 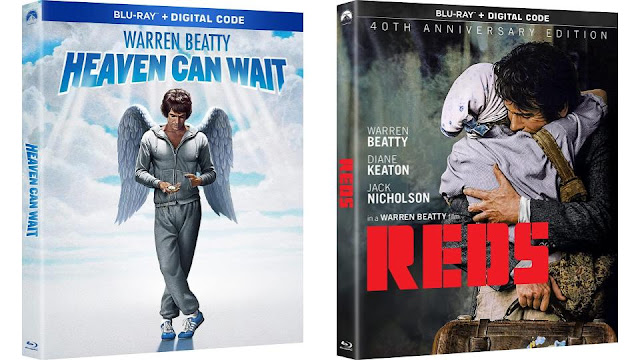 As actors-turned-directors go, Warren Beatty hit the ground running with what’s arguably one of the best one-two punches in movie history. More impressively, the films couldn’t be more different. One is a “feel good” comedy that showcases his natural charisma, while the other is an ambitious, long-gestating labor of love. Not only were both nominated for multiple Oscars, they’re indisputable classics.

On Blu-ray for the first time, this whimsical remake of 1941’s Here Comes Mr. Jordan features Beatty as Joe Pendleton, an NFL quarterback who’s taken to heaven prematurely and given a second chance at life. Unfortunately, his body’s been cremated, so head angel Mr. Jordan (James Mason) offers to put him into another - eccentric billionaire Leo Farnsworth - who’s just been poisoned by his conniving wife (Dyan Cannon) and his nebbish secretary (Charles Grodin).

While undoing a lot of Farnsworth’s unscrupulous business practices, Joe still wants to play football. So he buys the team he once played for and coerces friend-trainer Max (Jack Warden) to help him get back in shape. Meanwhile, he falls in love with Betty Logan (Julie Christie), the activist he meets when she arrives in town to protest one of Farnsworth’s environmentally destructive projects.

One of the best comedies of the ‘70s, Beatty co-directs Heaven Can Wait with Buck Henry (who also plays his beleaguered guardian angel). He also co-wrote the film with Elaine May, tailoring the classic story to suit his inherent charm and laidback comedic style. But this was never just a vanity project. The entire cast shines here, especially Grodin, whose wonderfully droll persona is here in abundance. Punctuated by a great score, Heaven Can Wait is funny, bittersweet and constantly engaging.

Beatty’s very next film was 1981’s Reds, a sprawling, epic and ultimately exhausting pet project he’d been trying to get off the ground for years. Both a biography and a love story, the film is about idealistic journalist John Reed (Beatty), who not-only witnesses the Russian Revolution of 1917, he achieves widespread notoriety writing a book about it (Ten Days That Shook the World). A longtime socialist, Reed embraces and radicalizes the ideals of Communist Labor Party, which doesn’t sit well with America’s capitalistic government.

However, the first half of the film chronicles his somewhat tumultuous relationship with Louise Bryant (Diane Keaton), a free spirited writer who leaves her hometown of Portland, not just to be with him, but to have her work taken more seriously. But Reed and his cronies are often so wrapped up in their own ideals that she begins to resent being relatively unheard, which briefly drives her into the arms of Reed’s friend, playwright Eugene O'Neill (Jack Nicholson).

Tonally, both halves are quite different and a strong argument could be made that Reds might have been better off as two separate films (even though no one was really doing that at the time). Taking it all in at once is sort of a daunting task, especially since the second half - focusing on Reed’s experiences in Europe - is dramatically stronger. But despite running 3+ hours, it’s often fascinating. Once again writing and directing, Beatty gives the viewer an entertaining history lesson on a grand scale while delivering the best performance of his entire career. We may not pop this one into the Blu-ray player as often as, say, Bonnie & Clyde, but it’s certainly a film everyone should experience.

WITNESS TO REDS - Retrospective documentary, featuring numerous interviews with most of the cast and crew. Running over 70 total minutes, it’s divided into seven chapters: “The Rising,” “Comrades,” “Testimonials,” “The March,” “Revolution Part 1,” “Revolution Part 2” and “Propaganda.”

Considering the critical and/or social impact of both films, I’m sort of surprised they weren’t released as part of the Paramount Presents series. Perhaps that’s because there is no new supplementary material. Heaven Can Wait is a barebones release, while the bonus material for Reds is the same as the 25th Anniversary Edition. However, the latter has been restored and remastered. At any rate, both films are worth space on your shelf.
Posted by D.M. Anderson at 4:21 PM