THE DECEIVERS is a Merchant Ivory Oddity 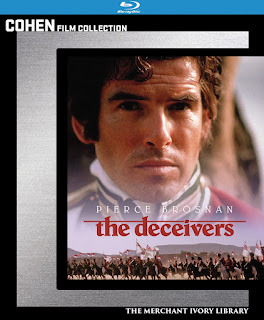 The Deceivers is sort of an oddity in the Merchant Ivory canon. While yet another period piece that’s been their bread & butter for decades, it’s arguably the closest they’ve ever come to producing an action-adventure film...with a few subtle dashes of horror thrown in. Similarly, Nicholas Meyer is an unusual choice for director, being that he’s best known for saving the Star Trek franchise from itself.

Was The Deceivers a fleeting attempt by Merchant Ivory to produce something with a bit more mainstream appeal? Perhaps, but the result is a mixed bag.

In 1825, Captain William Savage (Pierce Brosnan) of the East India Company is the administrator of a district that’s being terrorized by Thuggees, a marauding cult also known as “Deceivers.” They brutally raid, rob and murder their victims in the name of Kali, a six-armed goddess. Savage coerces an apprehended Thuggee, Hussein (Saeed Jaffrey), into helping him infiltrate the group by disguising himself as an Indian and acting the part.

However, he gets in a little too deep for his own good, not only participating in raids, but committing murder himself. It’s suggested that ingesting a hallucinogenic sugar has rendered Savage vulnerable to the Thuggees’ influence, perhaps even Kali herself. Whatever the case, Savage is slowly becoming...well, more savage. Meanwhile, his wife, Sarah (Helena Mitchell), waits back at home, fearing for his safety, especially since he’s defying the orders of his superior/father-in-law, Colonel Wilson (Keith Michell).

When focusing on Savage’s mission, the story has its moments, albeit a few unintentionally funny ones. With all due respect to Brosnan’s earnestness, he doesn’t really have it in him to convey Savage’s descent into madness without eliciting a few chuckles. Jaffrey, however, delivers an affecting performance as Hussein. Despite his background, the character sort of serves as Savage’s moral compass.

Seeing what makes the Thuggees tick is pretty interesting, but it takes awhile to get there. The first act is pretty dull and at no time does the relationship between Savage and Sarah spark any interest. Later, the film wisely leaves her on the sidelines until necessity requires her return. Driven more by plot and action than its characters, The Deceivers remains an anomaly in the Merchant Ivory stable. The same could be said about Meyer’s direction, which is serviceable, but lacks the attention he’s given characters in his more fondly-recalled films.