MAD MAX ANTHOLOGY (4K): The Apocalypse Gets an Upgrade 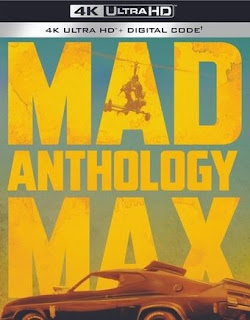 For 4K collectors, the big news is that The Road Warrior and Mad Max Beyond Thunderdome are now available in the format for the first time. And if the original Mad Max (released on 4K just last year by Kino Lorber) and Mad Max: Fury Road already sit on your shelves, rest-assured Warrior and Thunderdome are also available separately, so no double dipping is required to complete your collection.

The other news is that the Mad Max Anthology is essentially a bare bones release. With the exception of The Road Warrior - which has a few archival bonus features - no supplementary material is included, meaning some of those older discs are still worth hanging on to. This set is simply a convenient and economical way to upgrade all four films to 4K at the same time.

Of course, the entire series is worth owning (in any format). The original Mad Max is undoubtedly a product of its decade, but remains a superlative example of ‘70s era Ozploitation. It’s still pretty amazing what first-time director George Miller and producer Byron Kennedy were able to put on-screen with such limited resources. And what more can be said about The Road Warrior (aka Mad Max 2)? Not only did it set the bar for action cinema and make Mel Gibson a star, its eye-popping action sequences and apocalyptic aesthetics are still influential. Beyond Thunderdome, the weakest in the series, has also aged the worst, being too slick with ‘80s gloss for its own good. Still, it’s required viewing for completists.

The Road Warrior’s legacy may be far-reaching, but it’s arguably Mad Max: Fury Road that’ll go down in history as the franchise’s crown jewel (despite plenty o’ pissiness from butthurt misogynists with too much spare time on their hands). Not only is it one of the few belated sequels worth the 30 year wait - even without Gibson - it ranks among the best action movies ever made. I can’t imagine even Miller ever topping it.

But are they worth owning in 4K? Of course. Fury Road looks and sounds best in the format, but the others all feature good transfers, as well. Of the older films, The Road Warrior benefits most from the upgrade. Having never seen Kino Lorber’s recent 4K release of Mad Max, I can’t offer comparisons, but Warner Bros’ version looks great.

However, if bonus bells & whistles are your thing, you’ll probably want to give this set a pass. Mad Max Anthology is strictly for videophiles looking to upgrade the picture and sound. Digital copies of all four films are also included.

ROAD WAR: THE MAKING OF THE ROAD WARRIOR - Excellent 50-minute retrospective doc from 2016.