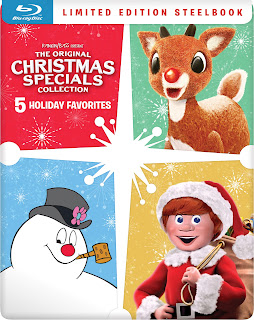 Since at least three of the classic Christmas specials featured in this set still air regularly during the holidays - numerous times - perhaps it’s difficult to develop any sense of fond nostalgia for them. On the other hand, unless you have kids, when was the last time you actually sat down to watch one?

It ain’t like when we were little, with one shot at catching them each year, so we planned our schedules around the nights they aired. For us, gathering ‘round the giant living-room Magnavox to watch Rudolph, Frosty and Kris Kringle rang in the real start of the Christmas season...at least until we grew older and more jaded, leaving such childish trifles behind. But damn, if they didn’t continue to spark fond holiday memories, no matter how many years passed.

So why not revisit them on your own time?

There’s something comforting about having five of Rankin/Bass’ holiday specials on disc, sort of a guarantee that they’ll never go away should networks do the unthinkable and retire them. Not only that, they’re uncut, commercial free and simply look better on Blu-ray. Additionally, the tactile pleasure of this cute, gift-worthy SteelBook is not unlike breaking out the old Dean Martin Christmas records every year, even though holiday tunes have been saturating the radio ever since Halloween ended.

As for the content, Rudolph the Rednosed Reindeer and Santa Claus is Comin’ to Town are the gems of the collection, but some might throw their hat in the ring for Frosty the Snowman. For the Debbie Downers, there’s The Little Drummer Boy, Rankin/Bass’ emotional scar-fest that ruined nearly as many childhoods as Bambi. Never airing as frequently as the others over the years, The Cricket on the Hearth is comparatively obscure and therefore not as nostalgically endearing.

There’s also some interesting bonus material, mostly related to Rudolph the Rednosed Reindeer, though a lengthy retrospective doc offers a nifty look at Rankin/Bass’ legacy. One minor quip would be that the set is spread out over four discs. Collectively running just under three-and-a-half hours, these specials could easily fit on two discs without any drop in audio/video quality. Other than that, this blast from the past is a fun, festive binge-a-thon...except for The Little Drummer Boy, of course. I still haven’t fully recovered from that one.

“THE ANIMAGIC WORLD OF RANKIN/BASS” - Easily the best of the bonus features, this is a nostalgic 45-minute appreciation of Rankin/Bass’ unique history, featuring interviews with many contemporary animators and directors.

RUDOLPH THE RED-NOSED REINDEER ATTRACTION FILM - The show was remade as a minute film to be used in a 4D attraction at various theme parks. Interesting, but not as charming as the original.

“REIMAGINING RUDOLPH IN 4D” - Making-of featurette about the above-mentioned film.

AUDIO COMMENTARIES - For Frosty the Snowman & Santa Claus is Comin’ to Town.