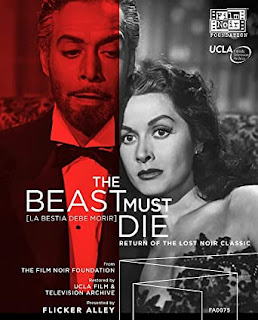 Not to be confused with the 1974 British horror film, The Beast Must Die is a crackling Argentinian crime thriller just waiting to be re-discovered by film noir fans.

But that’s not our initial impression. When sadistic, cold-blooded businessman Jorge Rattery (Guillermo Battaglia) claims he’s been poisoned just before dropping dead, we assume we’re in for a whodunit, especially since everyone in the room - except his mother - appears to have a good motive for murder. At first, the prime suspect is Felix Lane (Narciso Ibáñez Menta), a mystery writer whose diary reveals he was indeed planning to kill Jorge. But what are we to make of Jorge’s young stepson, seen hiding - and later destroying - the bottle containing the poison?

It’s at this point the film turns into a tale of bitter revenge in the best noir tradition. The remaining narrative is presented in flashback. Felix’s son is killed in a hit & run and the police have no leads. So after a grieving period, Felix vows to find and kill the culprit on his own, a tall order since there are no witnesses. But eventually, he learns the passenger in the car is famous actress Linda Lawson (Laura Hidalgo) and insinuates himself into her life in hopes of learning the identity of the driver. When he finally does, Felix sets about earning Jorge’s trust, waiting for the opportunity to catch him off guard.

By this time, the audience wants Jorge dead as badly as the rest of the cast. He really is a despicable bastard and especially abusive of his wife & stepson. Still, this is Felix’s story and we’re completely invested in his quest for revenge, made compelling by his patience and frequent diary entries (which were apparently a major part of the original novel). Menta plays the character perfectly, striking the right balance between level-headed stoicism and emotional vulnerability. And despite keeping Jorge’s dark secret for so long, Linda earns our sympathies since she’s also a victim of this lecherous monster’s abuse.

Though a few overwrought performances occasionally threaten to overwhelm certain scenes, The Beast Must Die is an overlooked gem. A great story, sharp direction and an antagonist we love to hate make this a must see. It’s been beautifully restored and Flicker Alley includes some nifty bonus features that provide important historical context. This is a film that definitely deserves to find a new audience, especially film noir lovers who think they’ve seen everything the genre has to offer.

INTRODUCTION TO THE BEAST MUST DIE - TCM's film noir guru Eddie Muller offers some excellent background on this film.

SUPPLEMENTAL BOOKLET - Features an essay, “Legacy of the Beast,” by Eddie Muller, who discusses the original novel, its author and the film.