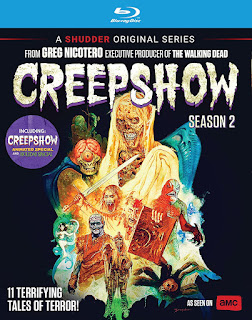 Review by Carl, the Coach Potato🙀

First, the bad news...Season Two of Creepshow consists of only five episodes and nine stories. Not only that, this set contains fewer bonus features, something that added a substantial amount of fun to Season 1’s 3-disc set (especially the guide to all the Easter Eggs).

However, the good news outweighs the bad. Season 2 doesn’t have as many episodes, but overall, it’s more entertainingly consistent. Every story not-only retains the comic book tone and aesthetic of the original film, they’re well-conceived and - as usual - cryptically funny. Even the technical aspects are generally an improvement.

If forced to choose, I’d say the stand-out episodes are “The Right Snuff,” about an astronaut’s self-centered obsession with escaping his legendary father’s shadow (with a great surprise ending), “Pesticide,” a surreal tale of an unscrupulous exterminator’s descent into madness, and “Night of the Living Late Show,” where an inventor creates a VR machine that places the users right in the middle of any movie they wish; in this case, it’s the classic, Horror Express.

All the stories are entertaining, with plenty of Easter eggs spread throughout for sharp-eyed horror fans. There are also clever narrative homages to the likes of H.P. Lovecraft, The Evil Dead and the original Creepshow, as well as its two creators (Stephen King & George A. Romero). The icing on the cake are the two Creepshow specials which streamed on Shudder, but not as part of the regular series. The indisputable highlight of the Animated Special is “Survivor Type,” based on King's most gruesome short story, while the Christmas Special features “Shapeshifters Anonymous,” which is as funny as it is bonkers.

And of course, it wouldn’t be Creepshow without The Creep to introduce each tale. He’s creatively rendered in a variety of styles, from puppetry to traditional & CG animation. All told, it’s another great batch of episodes. I only wish they'd make the seasons longer.

HOW IT WAS MADE: “NIGHT OF THE LIVING LATE SHOW” - How actors were composited into the film, Horror Express.