We All Need More CREEPSHOW in Our Lives 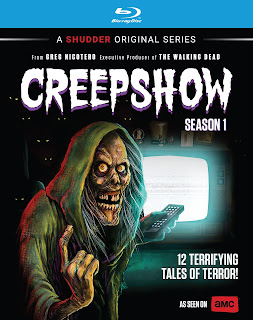 The original Creepshow was arguably the best horror anthology film ever made...scary, gory, funny and very stylish, with a colorful comic book aesthetic that made it unique for its time. More importantly, it was consistent. Whereas most other anthology films always seemed to have a clunker or two, all the stories in Creepshow displayed the same black-humored playfulness, as envisioned by one director (George A. Romero) and one screenwriter (Stephen King).

Though it seems like it should have happened years ago, Creepshow is now a TV series streaming on Shudder. I’m happy - and somewhat relieved - to say it retains the look and spirit of the original film, right down to the transitional comic book panels, as well as the return of “The Creep” (through both animation and puppetry). But even if you first tuned-in on Shudder or AMC, this 3-disc Blu-ray set is still worth picking up because it’s loaded with substantial bonus features...not-to-mention being binge-worthy and rewatchable.

Overseen by executive producer Greg Nicotero, these six episodes – consisting of two stories each – are the work of various writers and directors, a few of whom were involved in the original film. Hence, the individual stories vary in quality, but so far, the show’s overall batting average is pretty damn good. The series begins with a bang with “Gray Matter,” a dread-fueled piece based on one of my all-time favorite Stephen King tales, followed by “House of the Head.” The latter is directed by John Harrison (Creepshow 2) and is as much horrifying fun as anything from the original film.

In subsequent episodes, stand-out stories include “Bad Wolf Down,” an amusing spin on werewolf lore set during World War II; “Skincrawlers” is a hilarious and nasty satire of weight-loss programs; in “The Man in the Suitcase,” a few slackers get more than they bargained for with a titular character who spits out gold coins when in pain; “Lydia Layne’s Better Half” has a corporate executive trying to dispose of her dead girlfriend after accidentally killing her, but gets trapped in an elevator with the body.

While none of the stories are terrible, a few of them never really take off. We don’t really need another retelling of “The Monkey’s Paw,” and while “Times is Tough in Musky Holler” has some social satire that’s pure Romero, the story itself is convoluted. Considering the final tale is based on a Joe Hill story and directed by Tom Savini, “By the Silver Waters of Lake Champlain” is a surprising disappointment.

From a technical standpoint, though, every episode is extremely well put together, utilizing good old fashioned practical effects, deliberately artificial production design and a playfully sinister music score. And of course, the whole thing retains the colorful comic book look of the film that inspired it. With great performances by a large cast of familiar faces, Creepshow Season 1 is fun old school horror. Fast-paced, gory and often really funny, they’ve done King and Romero proud.