FIST OF FEAR, TOUCH OF DEATH...Game of Suckers 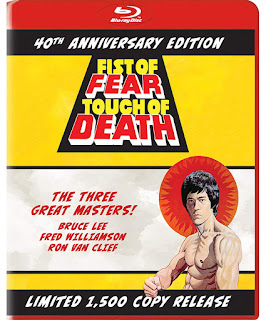 It must have been great to be an exploitation filmmaker in the days before the internet. By the time word gets-out your “movie” is a complete sham, you’ve already banked a shit-ton from the same clueless rubes who preferred dining at Denny’s because the menu didn’t require reading. Back then, a creative ad & title change could dupe horror fans into seeing the same movie twice, while indiscriminate martial arts fans marveled at how Bruce Lee managed to remain so prolific after his death.

Fist of Fear, Touch of Death is “Brucesploitation” at its most shameless. Vultures had already been picking at Lee’s corpse for years, cobbling together new movies with unused or existing footage from other films, but this pseudo-documentary takes it to another level, not-so-much a movie as patchwork of unrelated sequences in search of a plot. In this case, it’s the so-called “World Karate Championship,” as presented by a TV reporter played by Adolph Caesar (who would later be nominated for an Oscar...not for this film, of course).

Caesar is the one constant in a film that includes cameos by Fred Williamson & Ron Van Cleef, who show up for a couple of painfully bad sketches, while real-life martial artist Aaron Banks offers a conspiracy theory that Bruce Lee was killed by the dreaded Touch of Death, a so-called karate move where the victim dies weeks later. The middle act features Bruce Lee’s “biography,” a fabricated account of his youth consisting almost entirely of redubbed footage from a drama he did back in 1957, along with flashbacks of the samurai (!) grandfather who inspired him, lifted from a different film (which doesn't feature Lee).

That’s the extent of Lee’s “involvement.” What follows is another sketch featuring a guy in a Kato costume, then about twenty minutes of lethargic footage from karate matches. If the whole thing weren’t so hilariously piecemeal, it would be offensive. Instead, we watch in slack-jawed wonder that anyone was ever gullible enough to be suckered by this, even in the prehistoric ‘80s. Perhaps we’re laughing more at their expense than the snake oil salesmen who subjected them to it. Of course, Fist of Fear, Touch of Death is now a nostalgia piece. Not for its content, but for the audacity of everyone involved on both sides of the camera, who probably couldn’t get away with such a stunt today.

Or could they? Maybe they’re still here in abundance, but simply skip the theaters and go straight to YouTube, where those who prefer the Denny’s menu like to get their news. Shit, now that I think about it, Fist of Fear, Touch of Death just might be ripe for a remake. Just slap some old footage together, throw it on the internet and laugh your ass off as it goes viral.