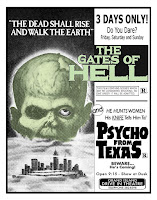 The Gates of Hell: A reporter and a psychic race to close the Gates of Hell after the suicide of a clergyman caused them to open, allowing the dead to rise from their graves. Psycho from Texas: A drifter/hitman is hired by a local business man to kidnap the local oil baron. The hitman had been reared in squalor, suffering the abuses of his whoring mama. When the baron escapes his assistant must chase him while the hitman takes care of a few loose ends. Watch films in DarkForce Entertainment's exclusive 'Drive-In Mode' featuring Cult Director Damon Packard 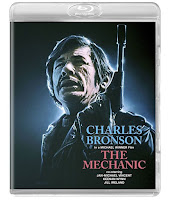 THE MECHANIC (1972) on Blu-ray 6/2
Arthur Bishop (Charles Bronson) is a veteran hit man who, owing to his penchant for making his targets' deaths seem like accidents, thinks himself an artist. It's made him very rich, but as he hits middle age, he's so depressed and lonely that he takes on one of his victim's sons, Steve McKenna (Jan-Michael Vincent), as his apprentice. Arthur puts him through a rigorous training period and brings him on several hits. As Steven improves, Arthur worries that he'll discover who killed his father. NEW FEATURES: Reversible cover art, a new interview with writer Lewis John Carlino & new audio commentary with Paul Talbot (Author of "Bronson's Loose!; The Making of the Death Wish films") 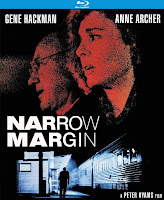 NARROW MARGIN on Blu-ray 6/30
From Peter Hyams, the acclaimed writer/director of Busting, Capricorn One, Outland, The Star Chamber and 2010, comes this suspenseful remake of the classic 1952 film noir. Screen legend Gene Hackman (The Package, Mississippi Burning) stars as an L.A. District Attorney attempting to take an unwilling murder witness (Anne Archer, The Naked Face) back to the United States to testify against a top-level mob boss. Frantically attempting to escape two deadly hitmen sent to silence her, they board a Vancouver-bound train only to find the killers are onboard with them. For the next 20 hours, as the train hurls through the beautiful but isolated Canadian wilderness, a deadly game of cat and mouse ensues in which their ability to tell a friend from foe is a matter of life and death. James B. Sikking (The Pelican Brief), J.T. Walsh (Needful Things), M. Emmet Walsh (Retroactive), Susan Hogan (Phobia) and Harris Yulin (The Midnight Man) co-star in this action-packed thriller. 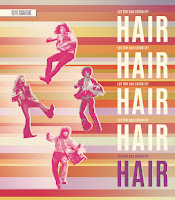 HAIR (Olive Signature Edition) on Blu-ray 6/30
Hair, the Broadway rock musical sensation of 1968, would find its way to the big screen over a decade later under the masterful direction of two-time Academy Award® winner Milos Forman (Best Director - One Flew Over the Cuckoo’s Nest - 1976, Amadeus - 1985) in a film adaptation as magical as it is timeless. Based on the Gerome Ragni, James Rado and Galt MacDermot stage musical, Hair stars John Savage (The Deer Hunter) as naïve country boy Claude Hooper Bukowski, a Vietnam War draftee who travels to New York where he’s swept up in a world of free love, hallucinogens and romance, courtesy of hippies Berger (Treat Williams), Jeannie (Annie Golden), Hud (Dorsey Wright) and Woof (Don Dacus). Beverly D’Angelo co-stars as Sheila, a beautiful debutante and the object of Claude’s affections.
Posted by D.M. Anderson at 11:24 AM