YOU DIE: Borrowed Time in More Ways Than One 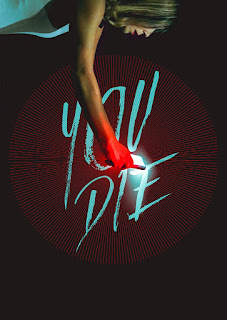 In addition to being an absolutely bitchin' title for a horror movie, You Die is a cellphone app that lets the dead reach-out from beyond the grave and kill you if you fail to download it to someone else’s phone within 24 hours.

If the premise sparks a little deja vu, you ain’t alone. Granted, I haven't seen many Italian horror films since the '80s, but if this one is any indication, their penchant for thievery remains alive and well. You Die is highly derivative of Ringu, though its trio of directors have a few nifty tricks up their sleeves.

After letting a stranger borrow her cellphone, young Asia (Erica Landofi) discovers a mysterious app, called You Die, has been downloaded. Not only does she see random ghostly figures through the screen, a 24-hour timer begins counting down. At first, she and her friends think its just some kind of game – sort of an evil Pokemon Go – but soon Asia sees dead people stalking her wherever she goes. Not only that, she’s is unable to delete the app or discard her phone (attempting either just speeds up the clock).

In Ringu, whoever watched the mysterious videotape had exactly seven days to avoid dying by showing it to some other poor rube. You Die takes the same basic premise and ups the ante. Asia learns that downloading the app onto another phone doesn’t let you off the hook. It simply buys you another 24 hours, meaning you’re required to find a new victim every day in order to stay alive.

This raises an interesting quandary: Are you ready to take a life every single day just to save your own, or will you break the cycle by taking one for the team? The story features a few peripheral characters more-than-willing to do the former, but the second half of the film focuses on Asia’s own moral dilemma, and she’s not as quick make such an ominous decision.

Plotwise, You Die doesn’t hold up to a ton of scrutiny, especially during a key scene of exposition where a guy Asia meets on the dark web explains how the app works. According to him, you aren’t actually supposed to tell anyone else how it works. So how does he know that unless he was told? That means you actually have to break that rule in order for it to spread to more than one phone, otherwise it just dies with the person you shared it with. But since there doesn’t appear to be any consequences for breaking the rule, why is there a rule in the first place?

But despite that lapse in logic, a borrowed premise and some obligatory jump-scares, You Die is an atmospheric little chiller with decent performances and a likable protagonist. It’s seldom very scary, but does manage to maintain a consistently foreboding tone, culminating in an appropriately bleak resolution.