WAR OF THE WORLDS (4K) and Why We Rewatch Movies 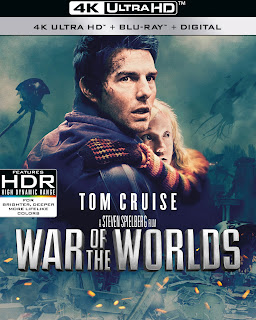 This is why I rewatch movies. While checking-out the new 4K Ultra release of War of the Worlds (which looks awesome, by the way), I noticed couple of things about the film that never occurred to me before.

First, Tom Cruise plays just a regular dude here, not a larger-than-life man of action. He ain’t some hot-shot pool player, fighter pilot, bartender, race driver, lawyer, agent or assassin. Ray Ferrier’s just a run-of-the-mill, blue-collar everyman with no particular skills or aspirations. In fact, his character is kind of shiftless and unreliable. In War of the Worlds, he doesn’t take charge or save the day and rarely does anything one would consider heroic. Think about it...when was the last time you saw Cruise convincingly play the guy next door?

Second, this is probably the closest director Steven Spielberg ever came to shoot-from-the-hip guerrilla filmmaking, especially during the initial attack scene, where the camera follows Ferrier’s attempt to flee the carnage in a lengthy, chaotic single take. It’s a disorienting, in-your-face sequence that invites stylistic comparisons to the D-Day invasion in Saving Private Ryan. And throughout the film, the action and jaw-dropping visual effects are mostly rendered from the point-of-view of its characters, giving the film a gritty intimacy you don’t usually find in big-budget blockbusters (including Spielberg's).

Ray is a divorced deadbeat dad forced to protect his two kids when a towering alien machine erupts from the ground and starts incinerating everything in sight. He and his family high-tail it out of town, hoping to make it to the kids' mother's house ahead. Ray doesn't have much of a plan beyond that and is forced to improvise when the house turns out to be abandoned. Meanwhile, he learns hordes of other tripods have popped up all over the world, wreaking havoc where ever they go.

Ray heads toward Boston - where his ex-in-laws live - though there’s no assurance they'll be any safer there. Estranged son Robbie (Justin Chatwin) is constantly defiant, sometimes for good reason, but mostly because he’s snarky little punk (not-to-mention an epic dumbass). Ray's anxiety-ridden daughter, Rachel (Dakota Fanning), depends on them both, but trusts Robbie more than her dad. The relationship between these three is the crux of the story and the entire invasion is seen through their eyes...no news flashes, extended battle scenes taking place elsewhere, military strategies, sub-plots or attacks on Washington. The world is simply getting its ass kicked while this family runs, hides and avoids mob panic. When you think about it, narrative simplicity is another thing else it shares with Saving Private Ryan.


War of the Worlds was always aesthetically unusual, weirdly-lit with considerable grain and washed-out colors. By design, it never had a clean, sharp & pristine image, which is nicely enhanced by this 4K transfer. There's no problem with the sound, either, which is as clean - and loud - as one could hope for. The result is an awesome assault on the senses. Elsewhere, the film remains a unique anomaly in the careers of both Cruise and Spielberg, a sci-fi action film that manages to turn a global alien invasion into a personal struggle for survival, much like H.G. Wells' original novel.

EXTRA KIBBLES
4K, BLU-RAY & DIGITAL COPIES
FEATURETTES (all carried over from the previous Blu-ray release) - “Revisiting the Invasion”; “The HG Wells Legacy”; “Steven Spielberg and the Original War of the Worlds”; “Characters: The Family Unit”; “Scoring War of the Worlds”; “We Are Not Alone”; “Designing the Enemy: Tripods and Aliens”; “Previsualization”
PRODUCTION DIARIES
GALLERIES
TRAILER
KITTY CONSENSUS:

MEE-OW! LIKE TAUNTING A MOUSE TO DEATH.
Posted by D.M. Anderson at 4:42 PM