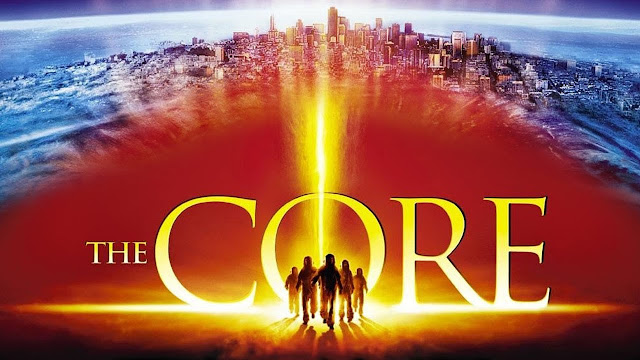 I love McDonald's. With the exception of our current president, it ain’t what anyone would mistake for fine dining, but at least it’s consistent. Whether visiting the Mall of America or passing through Biggs Junction, you always know what you're gonna get. And I don’t care what anyone says to the contrary...Quarter Pounders with cheese are fucking awesome.

I also love disaster movies. None of them have ever nabbed the Palme d’Or at Cannes, but at least they’re reliable. Whether you’re taking-in an Irwin Allen classic or SyFy Channel fart-fest, you always know what you’re gonna get. And I don’t care what anyone says to the contrary...The Core is fucking awesome.

Like McDonald’s, disaster movies are unpretentious cuisine to be consumed and enjoyed in the moment with a minimum of scrutiny or intellectual engagement. In that respect, The Core is as good as any other disaster movie ever made, with the exact same ingredients...lots of destruction, bombastic visuals, daffy dialogue, stock characters and science that ultimately falls apart with a quick Google search. It’s a film bereft of surprises, and that's what makes the movie a superlative example of the genre. Would a Quarter Pounder still be a Quarter Pounder if McDonald’s suddenly decided to add tomatoes?

The plot of this one is more-or-less Armageddon in reverse (minus Affleck & Tyler’s animal cracker foreplay...yuk). Earth's inner core has stopped rotating, as explained by scientist Josh Keyes, who ominously demonstrates the coming apocalypse with a peach, lighter and can of deodorant. This means the end of all life on Earth within several months. The solution: An elite team must burrow to the molten core and detonate nuclear bombs in order to jump-start the planet.
A phallic vessel is quickly constructed for such a task, loaded with all the usual suspects: no-nonsense pilot "Beck" Childs (Hillary Swank), geophysicists Keyes and Conrad Zimsky (Aaron Eckhart & Stanley Tucci) and the ship's eccentric designer "Braz" Brazelton (Delroy Lindo). Also on-board are a few folks whose sole purpose is to die...Dr. Serge Leveque (Tcheky Karyo), whose days are numbered the second he shows-off photos of his family, and Bob Iverson (Bruce Greenwood), commander of the mission. As any disasterphile will attest, any “commander” played by a sixth-billed actor is a dead man walking.

Monitoring events on the surface (i.e. those who are paid to ominously react to what's going on below) are General Purcell (Richard Jenkins), who represents the evil military, NASA Chief Talma Stickly (Alfre Woodard), the moral compass whose job is acting horrified by Purcell’s indifference to human life, and Rat (D.J. Qualls), the lovably flaky computer geek hired to prevent the story from leaking out on the internet.
Meanwhile, there's awful doings on the surface. Rome is decimated by an electromagnetic storm and San Francisco is cooked by solar rays that pierce the atmosphere, two sequences which feature the obligatory, post-Independence Day destruction of famous landmarks. Later, we learn that the current global crisis is the result of subterranean fuckery by the Army, foolishly oblivious of the global consequences.

If you've seen Independence Day, Deep Impact, Armageddon or any other ‘90s disaster epic, you've already seen The Core....even if you actually never watched The Core. Ultimately, that’s arguably the greatest praise one can give any disaster film. Whenever I order a Quarter Pounder from McDonald’s, it’s because I enjoyed the last Quarter Pounder, which tasted like every other Quarter Pounder I’ve eaten since they first appeared on the menu. I watched The Core because enjoyed Deep Impact, which I watched because I enjoyed Dante’s Peak, which I watched because I enjoyed Volcano...and Twister...and Daylight...on and on, dating all the way back to The Towering Inferno, the first disaster movie to thrill me when I was just a wee one. Not once did I ever feel ripped-off or short-changed.

The Core is epitome of by-the-numbers filmmaking, incorporating every element and all the cliches of the modern sci-fi disaster film without adding anything new. And that’s perfectly fine with me. The movie is technically well made and the cast earns their paychecks. Tucci and Lindo even manage to have fun with their roles, giving them some tongue-in-cheek zest lesser actors wouldn't have bothered with. The special effects are suitably flashy and spectacular, even if logic suggests any realistic movie taking place mostly underground would be as visually enthralling as sitting in a dark closet for two hours. Director Jon Ameil is no master chef, but at-least has the good sense not to fuck with a recipe that already works. Let creatively ambitious directors experiment on their own time.
If disaster movies are comfort food, The Core goes down like a piping hot Quarter Pounder with cheese (emphasis on the cheese, of course). It remains a lively and entertaining ride that's never dull, despite the feeling of deja vu that hangs over the proceedings...or perhaps because of it.
Posted by D.M. Anderson at 3:00 PM