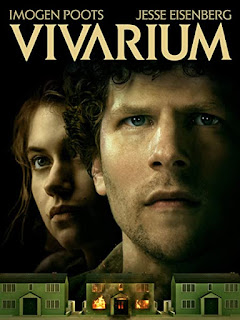 Review by Fluffy the Fearless

One thing is certain...you aren’t likely to see a weirder film this year. And if nothing else, Vivarium is visually fascinating and a potential good viewing choice while firing-up a fat one.

Gemma (Imogen Poots) and Tom (Jesse Eisenberg) are a young couple looking to buy a home. Real estate agent Martin (Jonathan Aris) takes them to a newly-built neighborhood called Yonder, street-after-street of identical green homes. After Martin suddenly disappears, they find they are literally unable to escape the neighborhood. No matter which direction they take, they always end up back at house #9. They even try burning it down one night, only to find it rebuilt the next day.

With no choice but to stay, Gemma and Tom end up being the only tenants in the neighborhood. Then an infant boy arrives in a box, with instructions that they’ll be released once they've finished raising him. He's a bizarre kid, to put it mildly. He grows at an accelerated rate, speaks with an adult voice and screeches incessantly until his needs are met. He’s also a strong candidate for the most irritating child character in movie history, which is probably by design so we can empathize with the couple’s growing resentment of him. Gemma makes fleeting attempts to bond with the boy, while Tom takes a turn for the worse, both physically and mentally. He ends up occupying his days digging a hole in the yard because he’s convinced there’s something else beneath them.

Despite the bizarre scenario and surreal imagery, Vivarium isn’t perplexing, telling a relatively straightforward story that’s easy to follow (a definite positive when one is stoned). It doesn’t take a genius to figure out the boy isn’t human. In fact, it’s immediately obvious, which means most of the film spends its time dropping hints as to who or what is behind Gemma & Tom’s imprisonment (though with hindsight, the opening title montage pretty-much gives it away). The payoff is pretty 'woah'-worthy, but this is also the type of thing Rod Serling could have managed in a fraction of the time. With some lengthy, repetitive stretches where nothing consequential happens, there simply isn’t enough to the story for a 90 minute film...not without chemical enhancement, anyway.

For baked potatoes, however, Vivarium might be an ethereal wonder. The striking artifice of the production design – the stark uniformity of the neighborhood, the interior & exterior of the house, even the sky itself – enhances the isolation of the main characters, as well as creating an unsettling tone not-unlike a bizarre dream. That alone might make it worth checking out for altered viewers looking to just push play, fall into the sofa and let the movie flow over them.

But even without herbal enhancement, Vivarium remains aesthetically engaging, with a concept that instills just-enough curiosity to ride-out the duller stretches and see how everything plays out.

NOT BAD, PARTICULARLY AFTER A BIT OF CATNIP.
Posted by D.M. Anderson at 3:39 PM