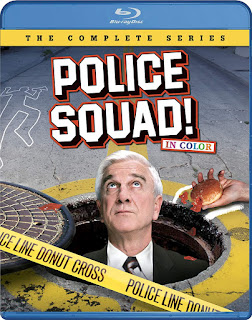 Review by My. Paws😻

By my late teens, Dad and I didn’t see eye-to-eye on most things. But for a brief time in 1982, we found common ground for thirty minutes each week when Police Squad! was on. Despite our growing differences, we’d laugh together at the show’s clever collection of satire, slapstick, wordplay and non-sequiturs. Sometimes me and Dad were so loud that Mom would come into the living room to see what the commotion was. I don’t think I ever told Dad this, but it’s one of my favorite childhood memories of him.

Police Squad! is unlike any comedy series ever made. And though younger viewers are likely unaware of the Quinn Martin crime dramas it affectionately parodies, such pop culture knowledge isn’t really a prerequisite. The show remains as funny today as it was four decades ago (something no one will be saying about what currently passes for parody).

Like they did with Airplane!, series creators David Zucker, Jim Abrahams & Jerry Zucker (collectively know as ZAZ) present Police Squad! with a completely straight face, right down to the production design, film score and a cast of typically-dramatic actors who don’t appear to be in on the joke (this was before Leslie Nielsen become synonymous with parody). If you were to turn the sound off, only periodic sight gags would suggest you’re watching a comedy. The dialogue ranges from eye-rolling puns to jokes so subtle that you won't catch them first time. Those deft touches are what’s been missing from most parodies ever since, including some of ZAZ’s own subsequent films.

Though it enjoys well-deserved cult classic status today, Police Squad! consisted of only six episodes before being unceremoniously canceled. With hindsight, that's probably a good thing because it never had the chance to grow stale, like most good ideas that are run into the ground. As it stands, these episodes remain some of the sharpest, funniest television ever produced.

And when this whole pandemic thing blows over, one of the first things I plan to do is visit my dad for a nostalgic binge.

EXTRA KIBBLES
LESLIE NIELSEN INTERVIEW
GAG REEL
CASTING TESTS – Alan North & Ed Williams
AUDIO COMMENTARIES – For 3 for the episodes, featuring David & Jerry Zucker, Jim Abrahams, Robert Wuhl, Robert K. Weiss
PRODUCTION MEMO HIGHLIGHTS – This is actually really interesting...a series of in-house memos of changes made in the scripts at the studio’s request, as well as the cancellation notice :(
LIST OF CELEBRITY DEATH SHOTS – We only saw six of ‘em. Take a look at some others they had in-mind.
PHOTO GALLERY
KITTY CONSENSUS:

MEE-OW! LIKE BEING TURNED LOOSE IN A BIRD SANCTUARY.
Posted by D.M. Anderson at 12:42 PM