CREEPSHOW and the Losing Battle 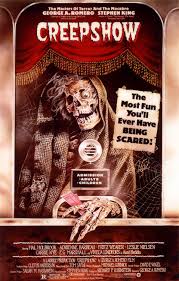 If you're a home owner, maybe you can relate to this...

My wife and I initially bought our house because we'd grown fed-up with apartment living...the lack of real privacy, idiots taking our single designated parking spot, sharing the laundry room, the pool being closed during the hottest days of the year because someone's kid decided to release a floater.

Then there's the variety of neighbors which, if you've ever enjoyed apartment life, you probably know all-too-well...sparring spouses, couples who copulate at maximum volume, guys who know cops on a first name basis and those who assume the rest of the world shares their personal taste in music. And of course, these assholes almost always occupy the apartment right above you.

During our first decade as apartment dwellers, Francie and I have experienced some doozies...briefly living next to a woman with Tourette Syndrome, another who was murdered by her ex-boyfriend while I watched SportsCenter, and a couple of dudes above us who frequently made their love of R. Kelly known to the adjoining county. To this day, whenever I hear "I Believe I Can Fly," I believe I can kill again.

So yeah, we were more than ready for a place to call our own, where we could paint the walls any color we wanted, get a dog, have our own driveway and no longer had to hear dysfunctional neighbors engaging in make-up sex after their latest bout of verbal combat.

Then there’s the part of home ownership, having lived in apartments my entire adult life, which obviously never crossed my mind while signing the 800 dotted lines of our mortgage. No longer could I simply call a manager whenever the toilet broke, the roof leaked or the water heater went tits-up. All this shit was now the responsibility of a guy whose tool kit consists of duct tape.

That’s not the worst part. After all, sometimes we’re able to afford throwing money at a repair issue by hiring someone who actually knows the difference between a claw hammer and a plunger. Several hundred bucks later, problem solved, and we don’t have to think about it again for another ten years.

But nothing can prepare one for the inevitable scourge which ultimately casts a dark shadow over anybody’s dream of eternal, white picket paradise...


Bugs are little middle fingers from Mother Nature. They serve no real purpose other than to make us run to our screaming kid’s bedroom with a fistful of tissue. Worse yet, their prolific presence in the home makes you feel like the filthiest being to ever walk the Earth. And while you may win the occasional battle against these little bastards, total victory is an impossible objective. Unless you have a personal Orkin Man living on your property in a state of permanent stand-by, they always come back.

Until I became a home owner, I thought spiders were the most hellish creature to scurry the planet. Then a few months after moving into our home, I ventured to the kitchen one morning to make some coffee, only to find the countertop teaming with ants. Hundreds of them, puttering here and there, none appearing to have any particular destination in-mind. While my family and I may not be poster children for cleanliness, we don't wallow in our own filth either. Still, I suddenly felt dirty. Worse yet, I felt violated.

I retaliated, of course, with an arsenal of traps, poisons and the good old fashioned fist. I've even considered leaving the carcasses of the dead on the counter as an example to the others. While I manage to win these little skirmishes, victory is fleeting. They inevitably return every year, no matter how clean we keep our kitchen. Ants quickly took the #1 spot on my list of the worst creatures on Earth. Scary as they are, at least spiders have the decency to come at you one-at-a-time, like henchmen in a martial arts movie.

Since then, Battle Ant has become an annual spring routine, when we square off yet-again for domestic supremacy. But I soon found out there are worse things than ants...Box Elder Bugs.

If you are unfamiliar with them, these guys hang out in trees during the warmer months, then venture into brightly-painted houses once the weather turns chilly. Because of the color of our home and the proximity of box elder trees, there are literally thousands sunning themselves just outside my daughter's window every autumn. Worse yet, there's nothing available at the local Home Depot that can totally eradicate them. The only effective method I've discovered to keep them outside is to seal the windows every winter. Some still manage to find their way in, so I need our vacuum cleaner handy to suck their legions from the ceiling. Needless to say, Box Elders soon usurped ants as my most hated brand of bug, but at least I knew how to fight them.

Then just recently, I was rudely awakened from a pleasant tryst with Angelina Jolie by a blood-curdling scream from my wife. Leaping from bed, I ran into the kitchen to find her gawking in bug-eyed horror at an open cupboard. Among the boxes of Cheerios and instant oatmeal was a bug. But unlike ants and Box Elders, this one was fast-as-fuck and required several attempts at blunt force trauma with a rolled-up copy of People magazine in order to kill it.

Which brings us to Creepshow, the 1982 collaboration between two of my favorite horror icons, Stephen King and George A. Romero. An amusing homage to E.C. horror comics of the 1950s (such as Tales from the Crypt), Creepshow consists of five ironic horror stories presented in true comic book fashion, complete with transitional panels and colorful backlighting during key scenes. The film is seldom particularly scary, more concerned with maintaining the black-humored themes of karma and revenge so prevalent in those old magazines. Nevertheless, it’s a supremely fun fright film, perhaps even family-friendly by modern standards.


Before becoming a homeowner, my personal favorite Creepshow segment was “Something to Tide You Over,” featuring a highly-amusing, post-Airplane Leslie Nielsen as a despicable millionaire who buries his cheating wife and her lover (pre-Cheers Ted Danson) up to their necks on the beach and records their agonizing deaths as the tide rolls in. Later, they return to terrorize him as waterlogged zombies.

Since buying a home, however, the true horror of this picture can be found in the final segment, “They’re Creeping Up on You,” mainly because I can now personally relate to what Upson Pratt (E.G. Marshall) is going through. Pratt is an evil, wealthy, self-centered germophobe whose environmentally-sterile penthouse apartment is ironically invaded by legions of cockroaches. While he deserves his comeuppance, the climactic scene, in which thousands of them burst from his mouth and chest, has me living in fear of a similar infestation in my own home.

The lone bug which so-terrified Francie in our cupboard was indeed a German cockroach, which isn’t indigenous to our region and is typically brought here in boxes or crates containing food products. Until then, I’d only seen cockroaches in Texas, where they're as big as Volkswagens.

Though we’ve long-since learned to seal all food products and keep the counters clean, spotting this critter in our cupboard was worse than previous ant or Box-Elder battles. Not only was the damned thing lightning-fast and tough to kill with a single blow, its presence made me feel filthy all over again. Sure, it was just one bug, but any homeowner will attest that, where there’s one, others are likely waiting in the walls. What if tomorrow, throwing open the cupboard where I keep my coffee, legions of them suddenly spilled out, squirming into all of my bodily orifices like they did to Upson Pratt?

Never in my life did I imagine spiders would drop as low as number four on my list of awful animals. But since cockroaches have usurped Box Elders as the worst creatures ever, Creepshow has taken on a new level of domestic grotesquery. While I don’t live in fear of thousands of them literally erupting from my chest, now that they have a tentative foothold in my home, I can’t help but think like Upson Pratt, terrified that these wayward little bastards have metaphorically arrived to make me account for past sins. I suppose I have a lot to answer for, such as my annual attempts to commit genocide on their creepy crawly cousins.
Posted by D.M. Anderson at 6:30 PM