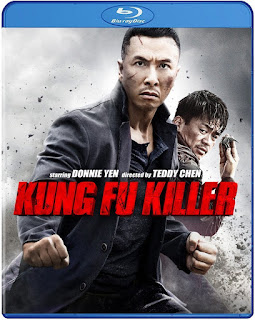 There's a vicious, sadistic serial killer on the loose in Hong Kong. His targets are seven different martial arts masters, and he's killing each one-by-one by beating them at their own particular skill. Hahou (Donnie Yen) is a former martial arts self-defense instructor incarcerated for accidentally killing an opponent. Since he knows all the potential targets, he offers to help police track down the killer in exchange for his freedom. That's the gist of Kung Fu Killer (aka Kung Fu Jungle), a hyperkinetic thriller that seldom stops to take a breath.

The action and plentiful fight scenes are well-choreographed, exciting and suitably violent. As usual, Yen is amazing, his considerable fighting skills on full display. Since he's also a consistently better actor than most other stars of the genre, he's still interesting to watch during the few moments he isn't snapping limps and kicking faces. Wang Baoqiang, as the title character, makes a formidably physical foe, though the motivation for his murder spree is murky at best. He appears to be driven by revenge after his wife dies of cancer, but since none of his victims had anything to do with that, we aren't sure why he has obsessively trained so hard to kill them. While the movie spends a considerable amount of time trying to instill some audience empathy for him, in the end, he simply comes across as batshit crazy.


But that's okay, since all most of us ultimately care about is the action. Kung Fu Killer is fast-paced and provides plenty of hand-to-hand combat in various interesting settings (atop a dinosaur skeleton, on rooftops, in the middle of a freeway, etc). Once again,Yen demonstrates why he's currently the best martial arts actor in the world (no wonder they want him for Star Wars Episode VIII).

NOT BAD...LIKE CAT CHOW AND ROUNDHOUSE KICKS TO THE FACE