DIE HARD and the Lasting Impression 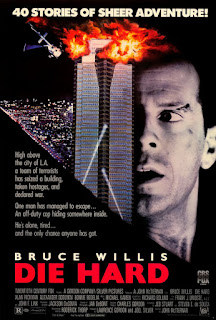 Bruce Willis is one badass mofo. Sure, he still appears in the occasional comedy or hip independent drama. And yeah, Bruce sometimes whores himself for movies needing a marquee name above the title. But mostly, when we think of Bruce Willis, we think of fights, guns, explosions and other varieties of manly mayhem. If he were ever required to fill out a job application, where its asks for previous work experience, all he'd need to write is Badass Mofo.

This all started with Die Hard, of course, the Holy Grail, Shakespeare and Star Wars of action movies, rightfully the standard by which all others are still judged. It transcended the genre to the point you'd be hard-pressed to find a single right-thinking individual who doesn't love this film. If you do have the misfortune of meeting someone like this, walk away and don't look back. They're bad people who probably also hate everything The Beatles ever recorded.

Die Hard has yet to be equaled, though many have tried. The list of movies obviously inspired by Die Hard is longer than the Magna Carta, including Under Siege, Under Siege 2, Daylight, The Taking of Beverly Hills, Speed, Speed 2, Sudden Death, Air Force One, Passenger 57, The Rock, Turbulence, Firestorm, Broken Arrow, Con-Air, Blown Away, The Negotiator, The Transporter, Skyscraper, Cliffhanger, Executive Decision, The Raid, Dredd, The Peacemaker, City Hunter, Lockout, Non-Stop, Paul Blart: Mall Cop, Olympus Has Fallen, White House Down and of course, four more Die Hard sequels (so far). And I haven’t even mentioned the plethora of low-budget, direct-to-video rip-offs like Derailed, Critical Mass, Windfall etc.

If a movie can be described as "Die Hard on a (insert noun here)", you know the formula:

Die Hard’s hero is John McClane (Bruce Willis), a New York cop who visits his estranged wife in Los Angeles over Christmas. They arrange to meet at her company party, held on the 30th floor of Nakatomi Plaza (a skyscraper which, in real life, is owned by 20th Century Fox). Unfortunately, a group previously-mentioned elite terrorists led by Hans Gruber (Alan Rickman, in his very first film role) seize the building and threaten to kill everyone inside unless their demands are met.

So good is Die Hard that everyone is cheerfully willing to overlook how stupid it really is, which is what separates the film from most of its imitators. Die Hard is to real life hostage situations what Star Wars is to actual space travel. And with all due respect to Scorsese, Tarantino and Spielberg, perhaps another true trait of a great director is their skill at making the ridiculous seem plausible, which John McTiernan masterfully pulls off. On the other hand, McTiernan did go on to helm Last Action Hero, The 13th Warrior & Rollerball (the worst remake of all time), which pretty much blows that argument out of the water. So never mind.

Anyway, Die Hard made Willis a bonafide movie star, and aside from those pesky self-indulgent moments when he still considers himself a versatile actor, he essentially plays the same guy in all his action movies. It doesn't really matter whether or not the character's name is McClane, as long as he's a badass mofo. Even in some of his more ambitious films (like Pulp Fiction, 12 Monkeys, Unbreakable & Looper), Willis is still a badass mofo. But best of all, with Die Hard, Willis made the rest of us pot-bellied, SUV-driving family guys think, "Hey...I'd do that to save my wife!"

It's been almost three decades since Willis made "Yippie-ki-yay, motherfucker" part of our modern vernacular and forever-endeared himself as a badass mofo when he pitched poor Hans Gruber from the window of Nakatomi Plaza. Hell, I can barely recall the time he wasn't a badass mofo, back when he was simply the smarmy love interest on Moonlighting and appearing in shitty comedies no one remembers. My oldest daughter, who loves Die Hard (watching the original is an annual holiday tradition in our dysfunctional home), didn't initially believe me when I informed her of his humble origins. In her world, Willis has always been a badass mofo.

Even harder to believe is the fact Willis was not initially high on Fox's list of choices for the lead role. They wanted someone like Sylvester Stallone, Clint Eastwood or Burt Reynolds. I do remember thinking at the time, before finally seeing Die Hard, Bruce Willis looked too much like my high school English teacher to be a truly convincing action guy. Of course, he proved me and the rest of the world wrong. I guess that's what we get for judging a book by its cover. But in our defense, we were simply conditioned by Hollywood's definition at the time...when badass mofos were big dudes with bitchin' mullets and biceps the size of tree trunks, who let their guns do the talking and shrugged off bullet wounds like they were mosquito bites.

Actually, Bruce and I are sort-of kindred spirits in that respect. While I'm sad to say I'm decidedly not a badass mofo (I'd still rather be more feared than admired), I've been similarly prejudged by my appearance and demeanor on more than one occasion, by members of my own family, no less...

In the real world, I've been a middle school English teacher for almost twenty years (nearly as long as Bruce has been a badass mofo). I started my profession squeaky-clean (suits, tie, clean-shaven, conservative haircut) and eager to change the world one child at a time. That me is long gone. In his place is a bearded, long-haired old dude who throws on shorts and a tee-shirt for work, even during the winter. He's also since-accepted the sad fact he has relatively little impact on his students' lives. If you've ever seen The Big Lebowski, that more-or-less sums up my attitude and appearance.

While I enjoy my job, the last thing any stranger would mistake me for is a teacher...just like one of my nephews who wasn't around during my days as a clean-cut educator. To him, I've always been the hairy uncle who scared the shit out of him as a toddler. All I had to do was look at him and he'd start bawling. It wasn't until he was 11 years old that he was stunned to learn I was an actual teacher.

"What did you think I did for a living?" I remember asking.
"I thought you were unemployed," he said.
"Really? Why?"
"You look unemployed. You know...like hippies."

I didn't fit his image of a teacher (or even a fast food employee), much like Bruce Willis didn't initially fit anyone's image of an action hero in the late 80s. But Willis redefined the action hero as someone who may not have granite pecs or perfect hair, yet still manages to be one badass mofo. I still like to think, aside from my nephew's similarly narrow idea of an educator, I've been able to accomplish the same thing in my classroom without a sharp suit and close shave. I sure hope so, because over the years my wardrobe has evolved into nothing but comfy shorts and tee shirts. All that's left in the closet for weddings or funerals are Hawaiian shirts and a few dusty pairs of Wranglers. Hell, I barely remember how to make a Windsor knot with the few ties I still own.
Posted by D.M. Anderson at 5:58 PM