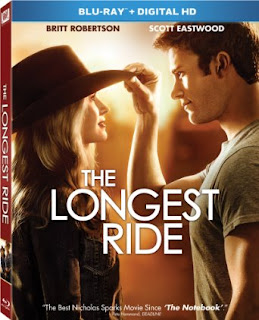 There are moments in The Longest Ride when Scott Eastwood eerily resembles his dad from the Rawhide days...brawny & generically handsome. The same could be said for his performance...serviceable, but nothing special. But it was years before ol' Clint stood out from the crowd, so maybe Scott just needs more time. Similarly, Britt Robertson isn't particularly memorable, tasked to do little but look cute and emote as best she can when required.

Together, they are as appealing as a vanilla cone topped with vanilla sprinkles, which isn't necessarily meant as criticism. Movies based on Nicholas Sparks novels aren't intended to be the rich, decadent chocolate delights you still gush about months later. They're slight, easily-digestible desserts meant to be enjoyed in the moment by its intended audience. In that respect, The Longest Ride is no better or worse than The Notebook or A Walk to Remember or Safe Haven...loved by Sparks fans, tolerated by those dating a Sparks fan.


Robertson plays Sophia, an ambitious grad student gunning for an internship at a prestigious New York art gallery. Then she meets Luke (Eastwood), a professional bull rider trying to make a comeback after a career-threatening injury. Of course, they're polar opposites in nearly every respect (otherwise, no movie). During their first date, they rescue an old widower, Ira Levinson (Alan Alda) from a car accident. Sophia befriends Ira, whose heartfelt love letters to his late wife, Ruth, soon has the young couple questioning whether or not their own personal ambitions are worth sacrificing true happiness with each other.

Even though you probably already know the answer to that, The Longest Ride switches back and forth between Luke & Sophia's relationship issues (which are relatively slight) and flashbacks of the peaks and valleys of the Levinsons' life together. There are no real surprises, except maybe the fact Jack Huston as young Ira and Oona Chaplin as Ruth are so much more charming and complex that we find ourselves wishing the whole movie was about them. When the focus returns to Luke and Sophia, it's almost an unwelcome intrusion.

Still, fans of this stuff shouldn't be too disappointed. There are the usual steamy love scenes (at least as much as a PG-13 rating permits), the usual brief moments of conflict, the usual gift-wrapped resolution, the usual love-conquers-all affirmation. In other words, The Longest Ride may not be phenomenally memorable, but like choosing a vanilla cone at Baskin-Robbins because taking a chance on a new flavor is too risky, at least you know what to expect.

NOT BAD...FOR FANS OF THIS KIND OF STUFF
(You know who you are)