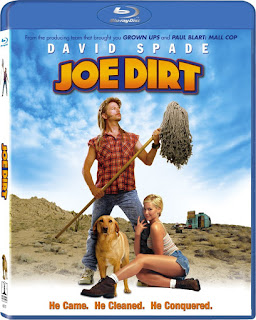 I never liked David Spade. Of all the Saturday Night Live alumni who moved on to bigger things, he's probably the most obnoxious and least talented (okay, maybe Jim Breuer is worse). I never found him funny or even likable. His brand of smarmy, sarcastic humor was always lost on me, be it SNL sketches or the few movies I bothered to watch. Joe Dirt wasn't among the latter. I couldn't stand him as a co-star; why would I subject myself to anything where his was the sole name above the title? But this one remains near-and-dear in the hearts of a lot of people, probably because they were 14 when they first saw it, an age when seeing someone using a spatula to pry a dog's balls from a frozen porch is the height of humor.

Finally seeing it 15 years later, most of my assumptions about Joe Dirt were accurate. It's lowest-common-denominator filmmaking...blatantly dumb and stupidly crude. Its threadbare plot, where the title character tells an LA shock-jock of his journey to find the parents who abandoned him years before, is mostly a clothesline to hang various episodic sketches, none of which are remotely clever or funny, despite over-the-top efforts to make them so.


Yet, though it hurts to say so, I kind of liked Joe Dirt. Sure, it's stupid, predictable and devoid of any gags that would amuse a right-thinking high school graduate. Still, the title character is oddly endearing, which I did not expect. I previously assumed Dirt was simply a white trash caricature (not exactly the most difficult stereotype to poke fun at), yet this might actually be Spade’s greatest performance, where he stops being ‘David Spade’ just long enough infuse the character with a surprising amount of depth and congeniality. He’s not gonna make us forget Forrest Gump (or even Pee Wee Herman), but he makes us care enough about his similar, episodic journey to see it through to the end.

While no modern classic in the purest sense, Joe Dirt manages to rise slightly above the usual celebrity schtick featuring former SNL stars (including most of Adam Sandler’s filmography). If you haven’t yet seen it, you’ll owe your brain an apology afterwards, but probably won’t hate yourself.