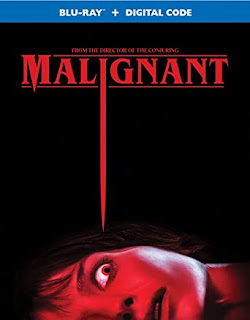 If nothing else, director James Wan’s first horror film in several years is certainly audacious.

In Malignant, Annabelle Wallis plays Madison, who’s pregnant but miscarries after her abusive husband slams her against a wall. Later that night, he’s brutally murdered by a shadowiy figure that entered their house. With the help of her younger sister, Sydney (Maddie Hasson), she tries to put her life back together while coming to terms with losing another child (she has miscarried several times before). Concurrently, the shadow figure slaughters a few other victims, which Madison is able to visualize as they’re occurring.

At first, I was briefly reminded of The Eyes of Laura Mars, which had a similar premise. But then, the film takes more than a few wild narrative turns, some of which would spoil the party if elaborated here. Of course, the police suspect Madison is the killer, especially after the investigation reveals her connection to the victims. As a child, Madison was a mental patient at a psychiatric hospital, sent there after her birth mother gave up custody. Learning why is one of the film’s gruesome surprises, but it has something to do with Madison’s nasty "imaginary friend," Gabriel, who’d coerce her into doing terrible things.

Presently, the shadowy killer appears to be Gabriel, who not only has the ability to manipulate electricity, but communicate with her through phones and radios. One needlessly stupid cop, Detective Moss (Michole Briana White) thinks she’s nuts, while the other, Detective Kekoa Shaw (George Young) learns the hard way that Gabriel - or at least someone claiming to be - is definitely real. Doing some investigating of her own, Sydney uncovers horrific information about Madison and Gabriel’s connection to each other, as well as the horrors she experienced as a child at the hands of the doctors charged with treating her.

Malignant has Wan throwing caution to the wind with a wild, fast-paced and unapologetically gory story that may not be as chilling or atmospheric as his more lauded horror films (i.e. Insidious, The Conjuring), but is a hell of a lot of fun. Considering Wan has lately been transitioning to other genres, one gets the impression that he’s trying to get what's left of those horror urges out of his system in one fell swoop. If that’s the case...well, mission accomplished.

Punctuated by (mostly) solid performances and a cleverly-rendered antagonist, Malignant is no masterpiece, nor is it particularly scary (despite an abundance of familiar jump scares). However, the film is entertaining, uninhibited and culminates in a bonkers final act that - whether one finds it thrilling or ridiculous - is certainly memorable.