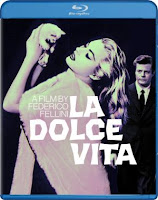 LA DOLCE VITA on Blu-ray 2/8/22
Federico Fellini, the most popular Italian filmmaker of all time, had his biggest hit with LA DOLCE VITA, an exquisite meditation on personal morality, wealth and fame, societal decay, and the perpetual search for meaning.  Equal parts provocative and breathtaking, LA DOLCE VITA stands the test of time, remaining one of the most influential films in cinematic history more than 60 years after its debut. On February 8, 2022, Paramount Home Entertainment will release LA DOLCE VITA on Blu-ray for audiences to once again experience this compelling and engrossing masterpiece.  The release will include a brand-new introduction by renowned filmmaker Martin Scorsese, who shares his thoughts on the film and its indelible impact on cinema. Both a critique of the culture of stardom and a look at the darkness beneath the seductive lifestyles of Rome’s rich, LA DOLCE VITA follows a notorious celebrity journalist over one crazy week.  Starring Marcello Mastroianni, Anita Ekberg, Anouk Aimée, and Yvonne Furneaux, the film is lauded for its complicated and rich story wrapped in extravagant visuals that have become as iconic as the film itself. 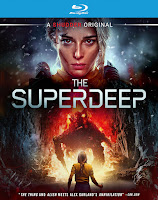 THE SUPERDEEP - Available on VOD, Digital HD, DVD & Blu-ray 1/4/22
RLJE Films, a business unit of AMC Networks, has picked up select rights to THE SUPERDEEP from Shudder, AMC Networks’ streaming service for horror, thriller and the supernatural. THE SUPERDEEP will be available on January 4, 2022 on VOD, Digital HD, DVD and Blu-ray. Directed by Arseniy Sukhin (Lockout), written by Victor Bondaryuk (Deadly Still), and inspired by true events, THE SUPERDEEP stars Milena Radulovic (The Balkan Line), Nikita Dyuvbanov (Abigail), Kirill Kovbas (Ikariya), Vadim Demchog (Son of a Rich) and Sergey Ivanyuk (Z’olushka). In THE SUPERDEEP, the Russian Kola Superdeep Borehole is the largest drilling project in the world, attempting to drill as far as possible into the Earth’s crust. After reaching depths of nearly seven miles below the surface, unexplained sounds resembling the screams and moans of numerous people were reported and the borehole was shut down. But when a small team of scientists and military personnel set out to unearth the source of the strange sounds, they end up discovering the greatest threat that humanity has ever faced. 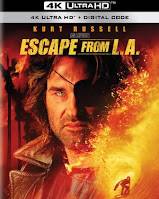 JOHN CARPENTER’S ESCAPE FROM L.A. arrives on 4K Ultra HD 2/22/22
Snake Plissken is back in the high-octane thrill-ride JOHN CARPENTER’S ESCAPE FROM L.A., arriving on 4K Ultra HD for the first time ever February 22, 2022 from Paramount Home Entertainment. Released in 1996, JOHN CARPENTER’S ESCAPE FROM L.A. was the highly anticipated follow up to the fan-favorite hit Escape from New York.  Kurt Russell returns as anti-hero Snake Plissken, who is called upon to save the world from a doomsday device after a 9.6 quake levels most of Los Angeles. Experience every outrageous and eye-popping moment of the post-apocalyptic classic in stunning 4K Ultra HD, including Snake surfing Wilshire Blvd., shooting hoops at the Coliseum, and dive bombing the Happy Kingdom theme park.  The film also features a wild assortment of friends, fiends and foes from a supporting cast that includes Steve Buscemi, Peter Fonda, Pam Grier, Stacy Keach, Cliff Robertson and Bruce Campbell. The 4K Ultra HD release features exceptional picture quality with Dolby Vision and 5.1 DTS-HD Master Audio. The disc also includes access to a Digital copy of the film and the original theatrical trailer.
Posted by D.M. Anderson at 1:01 PM