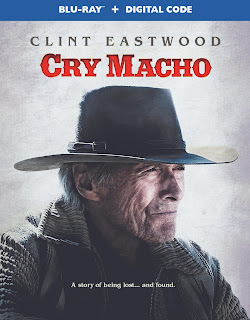 Every time Clint Eastwood comes out with a new movie - whether he’s directing, starring, or both - I always wonder if it’ll be his last. The guy’s remained relevant my entire life (I won’t disclose how long that is). Surely, he’s bound to run out of gas eventually. But like the Energizer Bunny, he keeps going.

Clint spends more time behind the camera these days, but when he does choose to act, he has the good sense to cast himself in roles reflective of his age. Once again, he’s doing double duty in Cry Macho, and if this one ends up being his last, at least he’s going out with quiet dignity.

The ‘macho’ of the title refers to the film's overall theme (the definition of which has probably changed for Eastwood himself over the years). At the behest of his former boss, Howard Polk (Dwight Yoakam), retired & widowed ex-rodeo star Mike Milo (Eastwood) agrees to drive to Mexico and bring back Polk’s 13-year-old son, Rafael (Eduardo Minett). Living down there with his unloving, indifferent mother, Leta (Fernanda Urrejola), Rafael is involved in a variety of illegal activities he considers ‘macho,’ such as boosting cars and entering his rooster in cockfighting contests.

This is essentially a road movie where, predictably, Mike and Rafael initially do not get along, but eventually form a close bond as they develop mutual respect. We learn much about their pasts after they become stranded in a small Mexican village. Rafael has been subjected to abuse by some of Leta’s various ‘uncles’ - most of whom are criminals themselves - while Mike eventually reveals he was a husband & father himself, but lost both in a car accident. During this time, they also befriend some of the locals and Mike teaches the kid how to ride a horse. Meanwhile, Leta wants her son back, sending henchmen to track the pair down. It turns out she and Howard are simply both using Rafael as a bargaining chip to get a financial advantage over the other.

Such external conflict, however,  is minimal and usually resolved in a scene or two. Cry Macho is mostly about the growth of its two main characters. As such, the film moves in fits and starts. Sometimes it’s engaging and sweet-natured, other times too languidly paced for its own good. Eastwood is suitably laconic, delivering an affecting, low-key performance, which adds a lot of charm to the romantic subplot between Mike and kindly restaurant owner Marta (Natalia Traven). Conversely, Minett is distractingly drab as Rafael, exacerbated by the abundant amount of screen time he shares with Eastwood. A few other ineffective supporting performances range from overwrought (Urrejola) to downright lazy (Yoakam).

By the way, ‘macho’ also refers to the name of Rafael’s rooster who comes along for the ride. Whether seated with them at a diner, riding shotgun with Clint or - in one instance - saving the day, Macho steals every scene he’s in. Chickens are inherently funny creatures and how he endears himself to Mike is quietly amusing.

Clint Eastwood’s glory days as both an actor and director are likely behind him, but he seems comfortable with that. While Cry Macho offers no real narrative surprises, watching him more-or-less play an extension of his own aging persona is fairly enjoyable. The pace and tone may be off-putting to some, but for those who’ve watched Clint evolve from iconic anti-hero to Hollywood’s elder statesman, it’s somewhat reassuring that he can still carry a film…even when being occasionally upstaged by a chicken.

FEATURETTES - “Back in the Saddle: The Making of Cry Macho”; “Macho and the Mustangs”