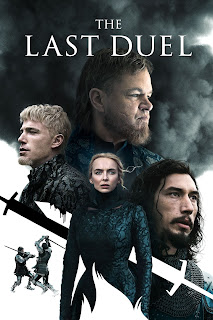 The Last Duel is now available on Digital, Blu-ray and DVD.

Though his viral venom might be a tad misdirected - but not entirely inaccurate - one can understand why Ridley Scott was kind of a grumpy bear over the lackluster box office performance of The Last Duel. Not only is it one of his more interesting recent films, the visual aesthetics are best appreciated in a theater.

Based on a book chronicling what was apparently the last sanctioned duel in medieval France, the film opens just as that fight to the death is beginning, a match between Jean de Carrouges (Matt Damon) and Jacques le Gris (Adam Driver). Then the story flashes back to the events leading up to it. Jean and Jacque were once fellow knights and close friends, eventually becoming bitter enemies through a variety of circumstances. Despite his selfless loyalty to the king, Jean is essentially broke. With only his family name to offer, he marries Marguerite (Jodie Comer), mostly for the dowry of land from her father.

However, the most valuable piece of land was already given to Count Pierre (Ben Affleck) to settle a debt. Pierre, in turn, gifted it to Jacques, who has since become the count’s squire, tax collector and most-trusted advisor. He’s also revealed to be a ruthless, self-serving womanizer. Worst yet, he becomes obsessed with Marguerite, and while Jean is away, Jacques forces his way into their house and rapes her. After she informs Jean what happened, he goes to the king and requests a duel to the death, which is ultimately granted.

This story is presented - as individual chapters - from three different points of view, Jean’s, Jacques’ and Marguerite’s. Going the Rashomon route is always a tricky task because one runs the risk of redundancy, but the film does a commendable job rendering all three POVs unique, each providing plot details that are either not included in the others, or the character’s recollection of events differs significantly. For example, the rape is depicted twice. To Jacques, it is a mutual moment of unbridled passion, while in Marguerite’s chapter, it’s violent and horrifying. Additionally, our perception of Jean changes throughout the film…from a tragic victim of circumstance, to a foolhardy rube, to a cold-blooded, unsympathetic husband whose reaction to Marguerite’s rape, in some ways, makes him worse than Jacques.

Speaking of which, The Last Duel is often deliberately incendiary. Despite the period setting, its themes are timely and none-too-subtle. If the viewer isn’t at-least a little enraged over the indignities and treatment suffered by Marguerite - and women, in general - they either haven’t been paying attention or their apathy knows no bounds. However, the narrative sometimes takes longer than necessary to get to the point. Despite handsome production design, impeccable attention to period detail and effective performances (though Damon sometimes seems out of his element), each chapter could’ve been shorn of 10-or-so minutes to reign in the running time. At two-and-a-half hours, a story this bleak can be exhausting.

Still, even though some of its visual impact is diminished on smaller screens, The Last Duel is Ridley Scott's best film since The Martian. The climactic duel is a visceral, bloody tour de force, followed by a denouement that manages to be both satisfying and intentionally infuriating. It isn’t always a “fun” film, but it’s certainly worthwhile.

THE MAKING OF THE LAST DUEL - A lengthy and revealing behind-the-scenes documentary.