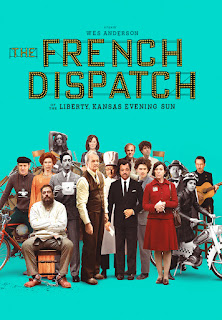 Add The French Dispatch to your collection now on Digital and on Blu-ray and DVD December 28.
THE FRENCH DISPATCH (Digital Review)
2021 / 108 min

Wes Anderson is his own little genre, creating art films for people who don’t think they like art films. They share an aesthetic and tone unique only to him...visually flamboyant while remaining disarmingly low-key. But while often extraordinarily self-indulgent, they’re always accessible. And though the director’s sense of humor is generally pretty dry, he’s not above throwing in a bit of silliness.

That being said, The French Dispatch is another wonderful slice of pure Anderson. Even if one isn’t in-sync with his off-center sensibilities and yet-another batch of emotionally aloof, deliberately static characters (featuring many of his favorite go-to actors), the film is a visual masterpiece. Every scene resembles a living painting.

Basically an anthology film, the overlying narrative arc features the staff of The French Dispatch, a fictional weekly magazine during the 1940s. Though written and assembled in France by Amercans - supervised by editor Arthur Howitzer (Bill Murray) - the magazine is published as part of Kansas City’s (also fictional) Sunday paper. The staff is putting together the final issue following Howitzer’s death, his obituary essentially being the film’s wraparound story.

The other three stories are “articles’ from the French Dispatch’s final issue, narrated by their authors. The first story, “The Concrete Masterpiece” features Benecio del Toro as a psychotic inmate whose impressionist painting of his muse - prison guard Simone (Lea Seydoux) - is a sensation with art dealer Cadzio (Adrian Brody) and his stuffy peers. Of the three, this segment is the most satirical and arguably the funniest.

A bit more convoluted is “Revisions to a Manifesto,” which has journalist Lucinda Krementz (Frances McDormand) sent to cover student protests led by idealistic young revolutionary Zefirelli (Timothy Chalamet), but gets more involved than she should. Not only does she end up in bed with the kid, she helps edit and revise his manifesto-in-progress. It’s well acted, of course, but the story is murkier and none of the characters are particularly likable.

Storywise, “The Private Dining Room of the Police Commissioner” is the most engaging. Food writer Roebuck Wright (Jeffrey Wright) is invited by The Commissaire (Mathieu Amairic) to partake in his chef’s famous cuisine, but unfortunately, the officer’s son is suddenly kidnapped and held for ransom by The Chauffeur (Edward Norton) in exchange for the release of the Abacus (Willem Dafoe), a mob accountant. Fast-moving, funny and capped by a nifty surprise ending, this segment also includes an amusing - completely unexpected -  animated sequence.

Like most of Wes Anderson’s previous films, The French Dispatch is deliberately paced without ever becoming boring, quirky without ever being inaccessible and artistic without ever growing pretentious. It’s a cinematic treat enhanced by creative production design and a wonderful score by Alexandre Desplat. Fans of the director will be familiar with all his moves, but that doesn’t make them any less enjoyable.