RON'S GONE WRONG is All Right 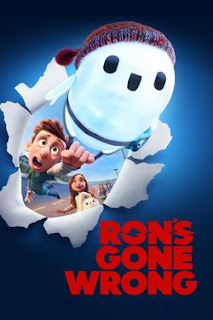 Ron’s Gone Wrong is sort of a pleasant surprise.

I generally approach most non-Disney CG-animated films with fairly low expectations, and the trailers for this one did nothing to raise them. Frankly speaking, it looked like cynically-pandering kiddie fare, more of a marketing campaign than a movie that would amuse anyone over twelve.

But while certainly geared toward pre-teens, Ron’s Gone Wrong has more going for it than one might expect. A woefully shaky opening act seemed to confirm my worst suspicions, introducing a basic concept that practically screams “Today’s kids are gonna love this!” However, it’s what they do with the concept that tends to elevate it above the likes, say, the Sing franchise.

B-Bots are the latest gotta-have tech-toy, personalized pill-shaped robots that are programmed to be a kid’s “best friend,” learning all about them through their social media accounts and enthusiastically loving the same things. Created to be a constant presence, B-Bots not-only connect their owners to others, they quickly become a status symbol. At Nonesuch Middle School, socially awkward Barney Pudowski is the only kid who doesn’t have one, at least until his well-meaning but embarrassingly out-of-touch family buy one that fell off a supply truck (sold by the driver).

This B-Bot - nicknamed Ron - turns out to be damaged, preventing its programming from loading. Initially, it causes even more trouble for Barney, both at school and with Bubble, the corporation that created B-Bots. But the story is nothing if not predictable…because it’s not “connected,” Ron develops the qualities which make it an actual companion, not a device through which to live vicariously. The developing friendship between Ron and Barney is funny, sweet and, more importantly, feels genuine.

The actual plot, involving Bubbles’ greedy COO Andrew Morris’ attempts to take back and destroy Ron, is less interesting, though does includes subtle - and not-so-subtle - social commentary regarding our overdependence on technology (as well as our blind trust that the corporations which sell them have our best interests in mind). The other major theme - that virtual friendships and on-line followers are no substitute for real interaction - won’t be lost on the film’s intended audience, but at-least it doesn’t beat them over the head with it.

Ron’s Gone Wrong offers no real narrative curveballs, but does a decent job weaving familiar tropes into an engaging story. Good characters help, of course. Barney is a likable protagonist and the dynamics of his family - while exaggerated - are probably relatable to quite a few people his age. Even Ron itself, despite being essentially expressionless, manages to be charming. All told, the film is a pleasant surprise.