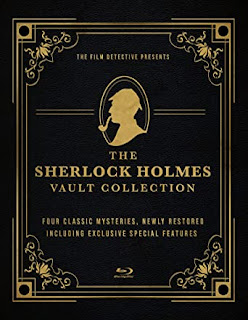 Perhaps some of you already knew that Sherlock Holmes is the most-adapted fictional character in history. And maybe you’re familiar with some of the iconic detective’s on-screen portrayals before he became synonymous with Basil Rathbone. Personally, I was unaware of the British series starring Arthur Wontner, who played Holmes in five films during the ‘30s.

The Sherlock Holmes Vault Collection includes three of those films, along with A Study in Scarlet, an in-name-only, American-made adaptation that’s vastly inferior to the others. As played by Reginald Owen, Holmes comes across more like a grim, hard-nosed cop than the cool intellect we’re used to.

The other three films, however, are fairly enjoyable. Sherlock Holmes’ Fatal Hour involves the blackmail and murder of an unscrupulous gambler. In The Triumph of Sherlock Holmes, he and Watson investigate the alleged killing of an American hiding-out in England from a malevolent secret society. Finally, Silver Blaze (aka Murder at the Baskervilles) involves a stolen racehorse, the murder of its trainer and a hunt for the man suspected of both. Naturally, Holmes’ arch enemy, Professor Moriarty, is the mastermind behind the crimes in each story.

All three films are somewhat hampered by low budgets and uninspired direction. At no time does it look like these actors are anywhere but a soundstage and blocked for a single stationary camera. However, Wontner makes an entertaining Holmes, instilling the character with just the right amounts of congenial arrogance and false humility. Ian Fleming is also amusing as Dr. Watson, playing the character more as a doting caretaker than a partner.

Of considerable interest to Sherlock Holmes fans will be all the short films which are included as bonus features on each disc (outlined below). Most hail from the silent era and some irreparably damaged, but we are treated to the first known Sherlock Holmes flick (from 1901!), as well as one featuring the character as a black man. From a historical perspective, these shorts are fascinating.

Overall, the video and audio aspects are pretty weak, but that could simply be due to the quality of the available prints. Some of the dark scenes are murky and I found it easier to understand the dialogue with the subtitles turned on. Still, this is an interesting collection and three of the four features are worth checking out for Sherlock Holmes enthusiasts. From an entertainment perspective, another film from the Wontner series would be preferable to A Study in Scarlet, though its inclusion does add to the set’s diverse depictions of the world’s most famous detective.

TEXT ESSAY FOR EACH FILM

AUDIO COMMENTARIES FOR EACH FILM