WEREWOLVES WITHIN: A Hairy Whodunit 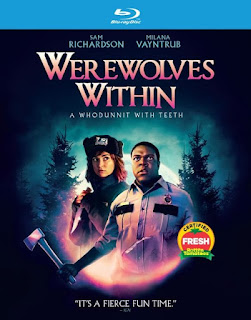 Recently dumped by his girlfriend, congenial forest ranger Finn Wheeler (Sam Richardson) relocates to the small town of Beaverfield. On his very first day, he meets an interesting assortment of oddballs, as well as perky mail carrier Cecily Moore (Milana Vayntrub), who shows him around town and brings him up to speed on everyone’s eccentricities. They also appear a bit smitten with each other.

His second day, however, is more of a challenge. Someone is brutally killed. Worse yet, a snowstorm cuts off the entire town from the outside world. Wheeler and most of the characters we met during the first act converge in the local resort lodge. At first, everyone believes the murderer might be Emerson Flint (Glenn Fleshler), a gun-toting recluse who threatens anyone setting foot on his property. But it soon becomes apparent that one of them is a werewolf.

As horror-comedies go, Werewolves Within ain’t bad. The characters and dialogue provide most of the humor, which is mildly amusing as opposed to laugh-out-loud funny, but at least isn’t heavy-handed or juvenile. The film is never particularly scary, but the whodunit aspects keep things interesting. We’re made to suspect almost everyone at one point or another. Not everyone is one they initially seem to be, which sets up a few genuine surprises during the climax, without any pesky red herrings crashing the party.

Anchored by earnest performances, a likable protagonist and a well-crafted story, Werewolves Within is unassumingly entertaining. It isn’t likely to resonate much once the end credits roll, but it’s certainly enjoyable in the moment.