THE MANY SAINTS OF NEWARK: Tony Who? 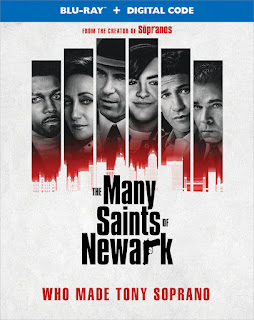 As someone who has always loved a good gangster saga, it almost shames me to admit I’ve never watched a single episode of HBO’s The Sopranos. With rare exception, I’ve always had an aversion to television shows which require weekly commitment, no matter how compelling they might be.

What can I say? I’m a movie guy. But in a way, it’s writers like me who might be best-qualified to review a film like this. Going into The Many Saints of Newark with almost no prior knowledge of what’s previously transpired, we’re in the position to judge its merits strictly as a stand-alone film. And for the most part, this one succeeds.

All that’s really required of newcomers is a basic awareness of who Tony Soprano was. The Many Saints of Newark is a prequel to The Sopranos, but despite any suggestion that this is some kind of origin story, Tony is a comparatively minor - almost peripheral - character. Though I must say that Michael Gandolfini, playing young Tony, looks and acts uncannily like his late father.

The story is mostly about local mob leader Dickie Moltisanti (Alessandro Nivola) and his escalating conflict with former friend/partner Harold (Leslie Odom Jr), who’s becoming powerful in the numbers racket. But Dickie also seems to be seeking personal redemption for some of his impulsive actions, which includes accidentally killing his own father, ‘Hollywood Dick’ (Ray Liotta), in a fit of rage. Perhaps out of guilt, he sees Hollywood’s incarcerated twin brother (also Liotta) as sort-of a moral compass. But even though he often feels remorse, Dickie isn’t a nice guy and is sometimes unable to get out of his own way. He takes his dead dad’s widow as a mistress - a relationship that ends really badly - and the conflict with Harold is largely his own fault.

There are numerous subplots, the one of greatest interest to Sopranos fans being Tony’s transition to young adulthood. Dealing with an indifferent father and an increasingly unstable mom, he looks to Dickie as a mentor. In the meantime, he becomes something of a troublemaking street punk. However, Tony is seldom part of any major plot development. Speaking of which, the episodic narrative is arguably the weakest aspect of the film. Taking place roughly over the course of a decade (late 60s-early 70s), it seems to be trying for a Goodfellas vibe. But while director Alan Taylor has Sopranos experience and certainly keeps things moving, he’s no Scorsese. The film is sometimes choppy, suffers from a few underdeveloped plotlines and never feels truly cinematic.

Still, it's seldom boring and the performances are good, especially Nivola’s, as is the attention to period detail (punctuated by a killer soundtrack). Most importantly, even though there are definite allusions to The Sopranos - such as younger versions of a few supporting characters -  one doesn’t necessarily need to be well-versed in the lore to enjoy it. The Many Saints of Newark may not be a new gangster classic, but as a violent, pulpy, stand-alone film, it works just fine.