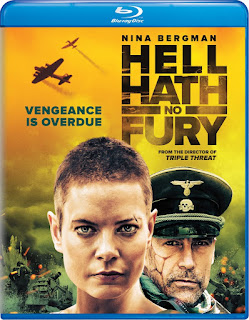 During World War II, Nazi officer Von Bruckner (Daniel Bernhardt) and his French girlfriend, Marie (Nine Bergman), plan on escaping France with bag of stolen gold. However, as the war is nearing its end, Marie is branded as a traitor to her country. She’s later “rescued” by a rogue group of American soldiers with an agenda: They expect her to lead them to the stolen gold, which is hidden somewhere in a country cemetery.

Led by cold-blooded Major Maitand (Louis Mandylor), these soldiers are motivated by pure greed - no matter the collateral damage - while flashbacks reveal Marie isn’t quite who she seems. Meanwhile, the soldiers engage in bloody skirmishes with members of the French Resistance, as well as an approaching Nazi troop led by Von Bruckner, previously assumed to be dead.

Hell Hath No Fury is the latest film by prolific stuntman-turned-director Jesse Johnson, probably best-known for his frequent collaborations with B-movie action hero Scott Adkins. This one is something of a departure from his other work. While the film certainly features bouts of brutal, bloody action - once again vividly depicted on a limited budget - there’s a greater emphasis on the story, bleak tone and backgrounds of its characters.

As such, the film is sporadically successful. Marie makes a sympathetic protagonist and she’s well-played by Bergman, while Von Bruckner is given more complexity than your typical movie Nazi. The U.S. soldiers, on the other hand, are mere thugs, despite a few token acknowledgements to their fallen comrades. Additionally, there’s little about the French Resistance fighters to earn our interest. There are ultimately times when we’d gladly trade-in some of the flashbacks & verbal sparring for a few more exploding bodies.Still, when the knives are drawn and the bullets fly, Hell Hath No Fury delivers plenty o’ blood spurting mayhem. It’s made a bit more intriguing by the ‘enemy-of-my-enemy’ alliance formed between Marie, Maitland and the Resistance when the Nazis come a-callin’. Despite a noble effort to create more than just another shoot ‘em up, these scenes are Jesse Johnson’s obvious comfort zone.