ANGELS WITH DIRTY FACES: A Tale of Two Besties 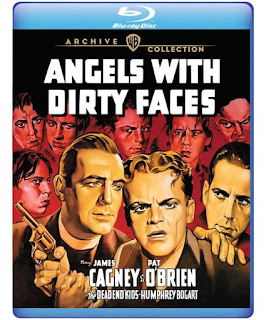 Classic crime films don’t get much better than this…

Raised in the slums, lifelong friends “Rocky” Sullivan & Jerry Connolly are a couple of streetwise kids who eventually end up on opposite sides of the law. As an adult, Rocky (James Cagney) becomes a powerful gangster. Returning to the old neighborhood after a stint in jail, he’s admired by many of the locals, especially a group of impressionable young hoods. Conversely, Jerry (Pat O’Brien) becomes a priest, remaining in the neighborhood as a mentor for troubled teens (including the same kids hoping to emulate Rocky’s quick road to riches).

Meanwhile, Rocky’s former partner, crooked lawyer Jim Frazier (Humphrey Bogart), has since hooked up with powerful mob boss Mac Keefer (George Bancroft). Both want Rocky eliminated, not just because of the money they owe him, but because he’s getting too big for his britches, blackmailing his way into a new partnership. However, the crux of the story is the relationship between the two friends. Though they’ve chosen different paths, these guys share mutual love and respect, even as Jerry tries to steer the kids clear of Rocky’s influence. Similarly, when Jerry leads a public anti-corruption campaign, Rocky won’t allow Keefer & Frazier to silence him, despite the immediate threat to their organization.

But most importantly, the film remains massively entertaining all these years later. Director Michael Curtiz deftly juggles a compelling story, dynamic characters, hard-hitting action and an unforgettable climax, making Angels with Dirty Faces an undisputed classic. With an outstanding Blu-ray transfer and some great vintage bonus features, it’s a must-own for any self-respecting film fan.

WARNER NIGHT AT THE MOVIES - Leonard Maltin introduces a batch of vintage goodies that used to play in theaters before the feature, including a newsreel, “Out Where the Stars Begin” (musical short), “Porky and Daffy (cartoon short) and some trailers. Includes a ‘view all’ option.