THE MONKEY KING REBORN and the Sullen Simian 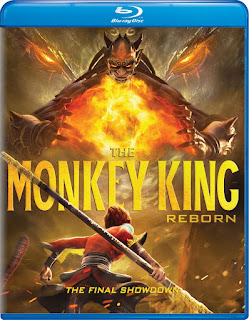 I know nothing about Sun Wukong, other than that it’s a centuries-old Chinese legend that has inspired countless books, stories, movies, TV shows, manga and video games. But I do know a character this old and revered deserves better treatment.

As depicted in The Monkey King Reborn, Sun Wukong is an arrogant, sullen, staff-wielding simian who perpetually scowls throughout the entire film. When he’s not verbally belittling every other character - including his friends - he exists in service of himself, which includes eating a rare forbidden fruit that unleashes an ancient demon capable of destroying the world. Even then, the only reason he decides to battle the demon & its legions is to save his own soul (well, the demon did capture his monk & mentor, Bajie, but Sun Wukong seldom expresses any real concern over that).

None of the other characters fare much better. Despite being colorful and elaborately animated, there’s nothing unique about them or their one-note personalities. They appear more inspired by video games than any kind of folklore, and most of their dialogue consists of ongoing expositional commentary or - regarding the numerous bad guys - introducing themselves with smirks & chutzpah. Even in computer animation, engaging characters matter.I couldn’t tell you if the plot itself is based on an ancient tale or not, but it unfolds like generic fantasy hoopla. The same applies to the action. There’s a ton of it, but despite all the visual fireworks - which are admittedly well done - the main thing the viewer feels is deja vu. While The Monkey King Reborn is pretty to look at, I can’t help but feel that such a legendary character deserves more than surface sheen.