The Good Half of BROADCAST SIGNAL INTRUSION 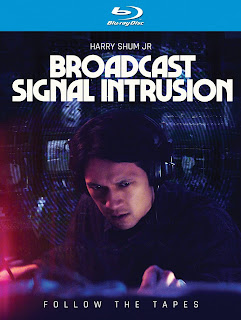 It’s a shame Broadcast Signal Intrusion doesn’t make-good on the promise of its inherently intriguing concept. The film is well made and often really creepy, but the narrative begins to unravel during the second half and culminates in an abrupt, disappointing conclusion.

But it still might be worth checking out. For a while, the story is pretty compelling. Taking place in 1999, widowed Chicago TV station archivist James (Harry Shum Jr) works a graveyard shift cataloging old broadcasts. He comes across an old airing of a program interrupted by a pirate signal, showing a masked figure droning unintelligibly. After coming across another, he becomes intrigued when learning each ‘broadcast signal interruption’ occurred the day after a woman went missing. This turns to obsession when James is told of a mysterious third ‘interruption,’ which supposedly happened the day after his own wife died.

At first, a lot of this is pretty compelling. The story does an excellent job establishing James as a sympathetic character trying to come to terms with his wife’s untimely death. Quietly desperate, he’s hell-bent on locating the third intrusion - and who’s behind it - despite the increasingly ominous implications. Elsewhere, director Jacob Gentry achieves the look and tone of an atmospheric horror film. The videos James acquires are particularly unnerving, and even though we aren’t yet sure what they mean, they certainly hint at something terrifying to come…

…that is, until the film turns into more of a scavenger hunt, with James and new acquaintance Alice (Kelley Mack) chasing down a succession of clues which lead them to a series of ‘revelations’ and plot twists that are either nonsensical or, worse yet, underwhelming. And while we’re invested in James, Alice is clumsily inserted into the story for the sole purpose of giving him someone to speak with. Once James is done providing all the exposition the viewer’s gonna get, she completely disappears.

Capping it off is a final scene that makes absolutely no sense, even after reflecting long and hard on the previous 90 minutes. I don’t mind films which conclude on a WTF note, but such an ending should be earned, not casually tacked-on without throwing the audience a bone or two. Too bad, really, because until then, Broadcast Signal Intrusion is a darkly compelling little thriller.