The Real MVP of IVANHOE 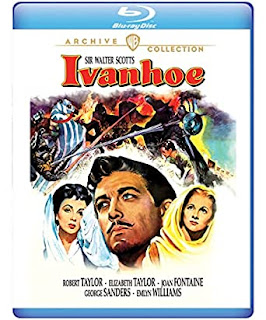 With all due respect to Robert Taylor…he starred in a lot of great films, but I don’t necessarily think they were great because of him. He was always a decent actor and perfectly serviceable leading man. However, there was never anything remarkable or distinctive about him. In his best films - I would argue Quo Vadis tops the list - Taylor was surrounded, often upstaged, by remarkable talent on both sides of the camera.

Arguably the most famous adaptation of Sir Walter Scott’s classic novel, Ivanhoe remains one of Taylor’s better films released during the height of his popularity. Really though, the titular character could have been played by anybody. Here, he assumes the role of loyal Saxon knight Wilfred of Ivanhoe, who discovers King Richard is being held for ransom by Austria. Richard’s conniving brother, Prince John (Guy Rolfe), refuses to pay and assumes the throne, maintaining power with the help of Norman knight De Bois-Guilbert (George Sanders).

After nearly being killed in a joust with Guilbert, Ivanhoe is joined by estranged father Cedric (Finlay Currie), Robin Hood’s (Harold Warrender) band of 'merry' men and a growing number of angry Saxons to storm Guilbert’s fortress (the best action sequence in the film). Meanwhile, enough money is collected to pay King Richard’s ransom. While the siege is successful, Guilbert and his men take Rebecca (Elizabeth Taylor) hostage and retreat to John’s castle. Holding her for the same ransom as Richard’s, John decides to put her on trial for witchcraft, much to Guilbert's chagrin.

After a relatively slow start, Ivanhoe becomes more engaging as it goes along, with an intriguing story and villains who are more interesting than its heroes. Again, Taylor is perfectly fine, but not particularly dynamic. Playing Ivanhoe’s love interest, Rowena, Joan Fontaine is wasted in a fairly thankless role, given little to do but be jealous of Rebecca (who’s equally smitten with Ivanhoe). Conversely, Sanders absolutely shines as Guilbert. Like the best antagonists, we may be rooting against him, but he’s not entirely unsympathetic. His affection for Rebecca is genuine, even if his efforts to keep her are nefarious.

As historical epics go, Ivanhoe benefits from a comparatively brisk 107 minute running time, as well as Miklos Rozsa’s sweeping score, which greatly enhances much of the action and drama. The cast is uniformly decent and Taylor provides the prerequisite stoicism his role requires. But ultimately, Sanders is the film’s MVP, being the only one in the cast to give his character any real depth.