ANTLERS: The Title Doesn't Tell All 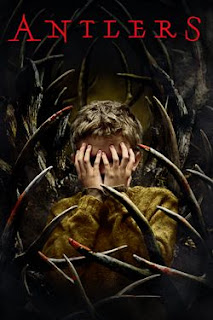 Add Antlers to your collection now on Digital and on Blu-ray and DVD January 4.
ANTLERS (Digital Review)
2021 / 99 min

Depending on who you ask, Antlers is great title for a horror film or an extremely stupid one.

On one hand, it suggests another crazy killer critter flick in the grand tradition of Tentacles, Slugs, Black Sheep and Night of the Lepus…typically innocuous animals which develop a voracious taste for human flesh. For certain horror fans, such movies are irresistible.

Conversely, such a title will undoubtedly prompt some to dismiss the film sight unseen. And who can blame them? I think even the most hardcore fan of carnivorous creature features (such as yours truly) must concede that a majority of them are terrible, especially those with the most straightforward titles.

Whether helped or hampered by the title, Antlers is not about a deadly deer or murderous moose. In fact, the concept is inspired by the Algonquin myth of Wendigo, a vengeful evil spirit. It’s also a relentlessly bleak film that includes such themes as child neglect & abandonment, the economy, sexual abuse and the environment.

That’s not to say there isn’t a nasty beast. When it finally shows itself, Wendigo is depicted as an unholy cross between an underfed stag and the xenomorph from Alien. With one victim’s torn-off face slapped over its own - which, of course, sickeningly slips off at an opportune moment - the monster is a gruesome creation. Though sparingly used, it looks & moves more-or-less convincingly.

But first, the narrative lays the groundwork for a story which extends beyond eviscerated bodies. Much of the focus is on two characters. One is Julia Meadows (Keri Russell), a troubled elementary school teacher who returns to her hometown to live with brother Paul (Jesse Plemons) following the death of their abusive father. The other is Lucas (Jeremy T. Thomas), a shy, impoverished boy whose meth-addicted dad becomes Wendigo's unwitting host.

Personal experience has Julia suspecting Lucas is a victim of similar abuse. However, a home visit reveals something far worse, which the boy himself is hiding. Though his father - and little brother - are getting progressively “sicker,” Lucas takes to feeding them while keeping both locked inside a room for everyone else’s safety. But Dad eventually morphs into a monster, resulting in the deaths of people perceived to be a threat to Lucas. As the town sheriff, Paul naturally doesn’t believe it, even after his Native-American predecessor, Warren (Graham Greene), informs them of the Wendigo legend.

Though pretty gory at times, Antlers has more on its plate than mere visceral thrills…perhaps a pleasant surprise for those who enjoy slow-burning horror with a bit of substance, definitely a let-down for would-be thrillseekers. In either case, this is an unexpectedly somber film, its grim tone exacerbated by the gloomy setting and suitably melancholic performances (especially young Thomas, outstanding in an inherently difficult role).

Somewhat predictably, Antlers draws to a downbeat, ominous conclusion. But considering the overall air of despair prevalent throughout the story, any kind of hunky-dory resolution would probably ring false. More ambitious than the title might suggest, it's a grim but mostly worthwhile journey, though one trip will likely be enough for most viewers.

FEATURETTES - “The Evil Within” (featuring director Scott Cooper); “An Exploration of Modern Horror” (featuring producer Guillermo del Toro); “Artifact and Totems”; “Gods Walk Among Us” (how the monster was created, using digital and practical effects); “Cry of the Wendigo” (the real life mythic origins of the Wendigo); “Metamorphosis” (features actor Scott Haze’s enthusiasm and dedication to evolving into the Wendigo); “Comic Con @ Home” (the best of the bonus features, this is a Zoom interview featuring Scoot Cooper and Guillermo del Toro, hosted by Steve Weintraub).