THE GARDENER: Bronzi Carries the Torch...and a Shovel 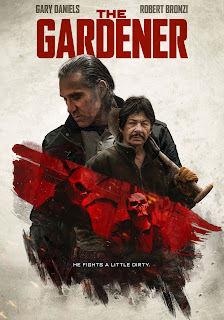 Hungarian born Robert Bronzi is one of those actors who gets by on his looks alone. That look just happens to be the legendary Charles Bronson. The resemblance is almost uncanny, and Bronzi has made a decent living doing the kind of B pictures ol’ Chuck was cranking-out during the latter half of his career. Nice work if you can get it.

That’s not to say Bronzi himself can’t act. In The Gardener, little else is required of him beyond smashing faces and snapping limbs with a perpetual stone face, but when he is required to speak, there’s a laid-back earnestness to his delivery that’s sorta charming. While it goes without saying an Oscar will never sit on Bronzi’s shelf, at least he can carry a low-wattage action flick on his shoulders without embarrassing himself.

And make no mistake, Bronzi’s the whole show as Peter, the titular character who works for an upper class family. In time-honored action movie tradition, Peter wasn’t always a gardener. He used to be a soldier and possesses skills beyond simply pruning the hedges, which are called into play when a team of home invaders break into the house in search of computer files owned by self-absorbed husband-father Stephen (Richard Kovacs).

What's on them doesn’t really matter to the plot. What does matter at this point is a nagging question: If these thugs manage to break-in and find the files within just a few minutes without being detected, why don’t they just leave? Why do they take the family hostage after they already got what they came for? It’s just one example of the overall narrative laziness prevalent throughout the film. Virtually every scenario is simply set-up to showcase Bronzi in action, whether it makes actual sense or not.

As such, the movie kind-of works. Though the bad guys are walking cliches - either psychotic, stupid or severely overconfident - Peter violently dispatches them with all the tools at his disposal (including a lawnmower). There’s nothing particularly dynamic or inventive about the action scenes, but they’re fun nevertheless, mainly because The Gardener plays very much like an '80s-era Bronson flick. Seeing his doppelganger carry the torch is the next best thing…and oddly comforting.