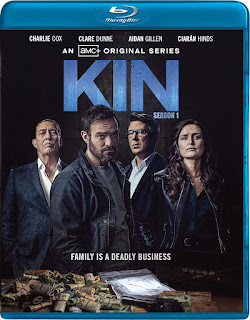 So it looks like TV is now the place for gangster sagas. Though that probably began with The Sopranos, a lot of cable channels and streaming services have picked up the ball and ran with it. AMC follows-up the incredible Gangs of London (which earned our top spot of the best Blu-ray releases of 2021) with the Irish crime drama, Kin, featuring the Kinsella family, who run afoul of Dublin’s most ruthless & powerful druglord, Eamon Cunningham (played to perfection by the great Ciarán Hinds).

Frank doesn’t want to escalate things any further - for a tough-talking organized crime leader, he’s kind of an indecisive milquetoast - but Amanda wants immediate payback, coercing Jimmy and his brother, Michael (Charlie Cox, arguably the show’s main character), to kill the man who did the hit. For Michael, the consequences extend beyond incurring Eamon’s wrath. Recently released from prison, he desperately wants to reconnect with estranged daughter Anna (Hannah Adeogun), but getting sucked back into the family business may make that impossible.

While not as epic or sweeping as Gangs of London, Kin maintains interest throughout the season, though some subplots don’t add much to the narrative. Since few of those are actually resolved, one must assume they exist to set up Season Two. Still, the swelling conflict is compelling…a case of bad guys versus worse guys with the Kinsellas as de facto protagonists, mainly because we get to know the family better. Most of them are deeply flawed and don’t always make the wisest decisions (Michael's the most sympathetic, Eric’s the most belligerent). But they have each other's backs, even if doing so often makes the situation worse. Especially intriguing is the developing clash between Frank and Amanda, the latter of whom he begins to view as a threat to his authority (and he may not be wrong).

Of course, there are the customary plot strands which end on a cliffhanger, some of which are just interesting enough to make us curious about how they’ll be resolved in Season Two. Most importantly, though, Kin wraps up the primary story in a satisfying manner and the characters feel authentic. A bit slower and less violent than one might expect from a gangster saga, it’s nevertheless worth checking out. Be advised, however, that many viewers might want to use the subtitle option, as the show is steeped in thick Irish accents, dialect and slang.