ONE-ARMED BOXER Gets the Shaft 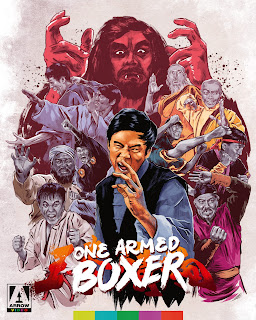 The first thing Western audiences will notice about One-Armed Boxer is the liberal use of Isaac Hayes’ “Theme from Shaft” throughout the film, either in snippets or accompanying the opening credits and various montages. While certainly amusing, the music actually fits pretty well…probably because the song’s dramatic urgency transcends the urban setting of the film for which it was originally intended. I can personally attest that it makes a great soundtrack to your morning commute.

Elsewhere, legendary martial arts auteur Wang Yu throws together an almost non-stop barrage of fight sequences, connected by the most threadbare of plots. Which is fine because nobody ever watches these things for dynamic characters or complex themes. But for the record, Yu plays the title character, though he still has both appendages for the first two-thirds of the film. Before then, his fight school is pitted against a rival one that engages in drug dealing, prostitution and - the catalyst of this conflict - beating an old man in an attempt to steal his bird.

Yu loses an arm fighting hired gun Erh Ku (Fei Lung), but manages to escape while everyone else in his school fights to their deaths. In what might be the most comically brief recovery, romance and training montage in film history (total time, maybe 15 minutes), Yu returns to wreak havoc on everyone who took his arm and killed his friends, with new girlfriend Jade (Hsin Tang) tagging along to be placed in peril. His remaining arm is now invincible and lethal after being strengthened by fire.

Yu’s transition from defending his school’s honor to avenging their deaths is so short that one might suspect a good chunk of the second act is actually missing. Most likely though, Yu simply couldn’t wait to get back to the mayhem. Storytelling was never his greatest strength anyway, so why not simply fast-forward? At least he knows where his skills as a filmmaker and actor lie, which means the fight sequences are the sole reason One-Armed Boxer is worth seeing.

The action scenes are not only plentiful, they go on forever and follow a similar pattern: jumping, striking, kicking, grunting and spitting-up blood (signifying the loser). It’s ridiculous fun for a while and fans of old school martial arts exploitation will be in hog heaven. But despite appropriating Isaac Hayes’ classic cut to liven things up, casual viewers will probably be ready to check-out after about 20 minutes.

For Blu-ray, Arrow Video offers a decent 2K transfer, presented in both Mandarin and an English dub. This disc is lighter on bonus features than most recent Arrow releases, though the extended vintage interview with Wang Yu is excellent.

INTERVIEW WITH WANG YU - A lengthy vintage interview from 2001, where the director and star reflects on his career. Especially interesting are his early days.

TRAILERS - In addition to trailers for this film, there’s a half-hour collection of trailers for other Wang Yu films.