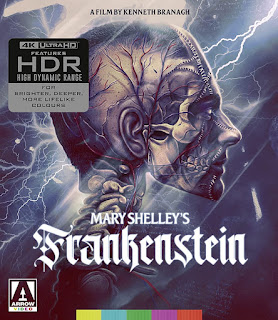 There are a few moments in which Victor Frankenstein (Kenneth Branagh) somewhat arrogantly refers to the organs & body parts he uses to put together his monster as mere “materials” to achieve his goal. One could assume that might have been Branagh’s approach to Mary Shelley’s Frankenstein.

Frankenstein’s own obsession and ego precluded any notion that reanimating the dead would have dire consequences, not just for him and his loved ones, but the Creature (Robert De Niro) itself. Similarly, this opulent adaptation, while beautiful to look at and fairly faithful to the novel, is the work of a director with the chutzpah to reshape the material as a Victorian tragedy...with himself as the centerpiece.

Not that Branagh’s take isn’t without its virtues. In fact, there are some great moments, such as when Victor brings the Creature to life, as well as the horrific fate of his adoptive-sister/wife Elizabeth (Helena Bonham Carter). And of course, the best scenes belong to De Niro, who gives the Creature a level of complexity and pathos that rivals - and frequently surpasses - Boris Karloff’s legendary performance.

But like Victor, Branagh is sometimes his own worst enemy. Frequently shirtless & sweaty, with long, flowing locks of hair, he looks like he belongs on the cover of a romance novel. Not only that, Branagh overacts tremendously, spouting overwrought dialogue as if he’s on a stage emoting to the balcony. In fact, much of the film feels more like an epic Broadway production than anything resembling a horror film.

In Bram Stoker’s Dracula - to which this film has always been compared (fairly or not) - Francis Ford Coppola effectively married gothic romance elements with Gary Oldman’s sympathetic portrayal of the titular character. The romantic aspects of Branagh’s film don’t resonate much, with such an emphasis on Victor’s histrionics that Elizabeth’s presence feels almost like an intrusion. Additionally, James Whale’s 1931 adaptation looms so large that most of us have forgotten his film distilled Shelley’s book almost entirely down to its sci-fi-horror elements, to the point that it’s the standard by which all subsequent adaptations would be measured. Not even remotely scary - nor does it really try to be - this one falls short.

Still, Mary Shelley’s Frankenstein is pretty faithful to the book, which definitely counts for something, as does the elaborate production design and the Creature’s gruesome make-up work (nominated for an Oscar). And even though much of the film plays like a Kenneth Branagh vanity project, he surrounds himself with a good cast (though John Cleese is underused). For the most part, the film looks and sounds great with this 4K UHD restoration, which is supplemented by a smattering of interesting new bonus features.

“MARY SHELLEY AND THE CREATION OF A MONSTER” - A pretty interesting history of Mary Shelley’s story and its adaptations.

“DISSECTING MARY SHELLEY’S FRANKENSTEIN” - Differences between the movie and the novel.

“FRANKENSTEIN” - Made in 1910, this 12-minute film is the very first adaptation of the novel. From a historical perspective, it’s the most interesting of the bonus features.

REVERSIBLE COVER - Featuring new and original artwork (we kinda prefer the new one).