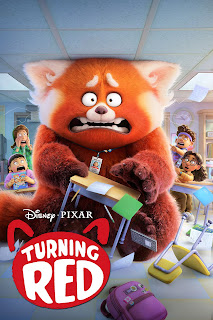 TURNING RED (Digital Movie Review)
2022 / 100 min
FROM WALT DISNEY/PIXAR
Review by Stinky the Destroyer😺
Add Turning Red to your collection now on Digital and on 4K, Blu-ray and DVD May 3.

As a middle school teacher in the real world, I can attest that Turning Red’s depiction of kids that age is pretty much spot-on. They’re walking balls of indecisiveness, insecurity and no-small-amount of self-absorption, often torn between meeting the expectations of parents and seeking the approval of friends. As we all know, they aren't always successful at either.

Both satirical and perceptive, the scenes of main character Mei’s relationships with friends and family - and the dichotomy between them - are ultimately what drive the film. As such, it’s often as funny as it is touching. In other words, Turning Red is another great Pixar movie, with a terrific - albeit familiar -  message about embracing your individuality during a period when kids typically undergo the biggest physical and emotional changes.

The film’s fantasy-tinged story is simply a vessel for those themes. Set in Canada in 2002 - somewhat inspired by director Domee Shi's childhood experiences - Chinese-Canadian Mei is an overachieving 8th grader whose life is thrown into turmoil when she starts turning into a giant red panda whenever excited. Though it’s an obvious metaphor for puberty, Mei’s over-protective mother informs her it’s a centuries-old curse which all the women in her family experience. However, the curse can be contained through a ritual that keeps the panda at bay.

Though miserable at first, Mei learns to control, even embrace, her inner panda. Her closest friends are enamored with it, as are her peers, suddenly paying attention to her for the first time. The girls also capitalize on the opportunity to use the panda to raise money for concert tickets to 4-Town, the currently-hot boy band. Naturally, this doesn’t sit well with Mom (or some older relatives who’ve come to town for the upcoming ritual). However, Mei is no longer sure she wants to get rid of the panda.

Turning Red may not quite rank among Pixar’s greatest films, but it’s arguably one of the funniest, particularly during the first half. I watched this with my two daughters - who’ve long-since left middle school behind - and both frequently broke-out in knowling laughter. They’ve been there before, as has everybody…boy, girl or otherwise. Whether it's 2002 or 2022, the puberty years are almost always tumultuous.

The film culminates in a climactic concert that’s both exciting and hilarious (boy bands haven’t really changed all that much in 20 years, either). Though the denouement is definitely well-within Pixar’s comfort zone, Turning Red subtly steps outside the box with some of its themes, while providing reassurance that feeling a little different can be something to embrace rather than suppress. And as usual, the film is brilliantly animated.

FEATURETTES - “Life of a Shot”; “How to Build a Boy Band”; “Ani-Mei-Tion”; “Turning Red’s Anime Influence.”