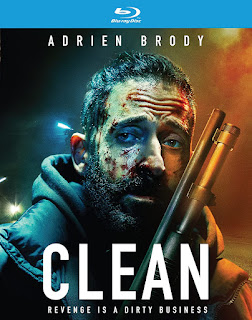 Not only does Adrien Brody star in Clean, he produces, co-writes and even does the music score. Acting, of course, remains his strongest suit, and he portrays the title character with laconic earnestness, keeping the film watchable during the pokier moments, of which there are plenty.

As a screenwriter, well…Brody (along with director Paul Solet) must have had the vigilante movie playbook open when concocting their story. There’s nary a moment in Clean that doesn’t smack of deja vu. That ain’t necessarily a bad thing, since those who go in for this sort of thing probably wouldn’t appreciate the formula being tweaked too much. But if you’re gonna make a film that plays like a greatest hits album, how about a little less introspective brooding and a little more ass-kicking?

Clean is a cynical world-weary garbage man who lives in a crappy neighborhood and laments how shitty everything is (mostly through Brody’s gravelly voice-over narration). Of course, he wasn’t always a garbage man. Clean is your standard-issue former hitman with a dark past. But despite a nihilistic worldview, he spends much of his spare time making amends for past sins…sprucing up decrepit houses, feeding stray dogs and, more significantly, watching over Dianda (Chandler DuPont), a young girl who lives with her grandmother.

Naturally, Clean’s special set of skills come in handy when punks attempt to rape Dianda, one of whom is the spoiled son of sadistic druglord Michael (Glenn Fleshler). Now Michael wants Clean, Dianda and her grandmother dead, sending a small army to hunt them down. But somehow, we suspect a small army is something Clean’s used to dealing with.

There are no real narrative surprises and seasoned viewers will easily recognize tropes from countless other payback pictures, including Taxi Driver, John Wick, The Equalizer, even Death Wish 3, of all things. Clean himself is the only fully-realized character; the bad guys are all one-note caricatures…sneering, remorseless and so overtly evil that their bloody deaths are all but assured. When the bodies do start to pile up, Clean is a ton of rousing, gory fun. But considering the genre - and our inherent expectations from such films - it sure takes its sweet time getting there.

Still, I’ve seen worse. Brody’s engaging and his character is certainly likable, even if the narrative spends a little too much time wallowing in his misery. Clean adds nothing to the genre that we haven’t seen before, but our patience is ultimately rewarded by a blood-soaked, bravura finale.