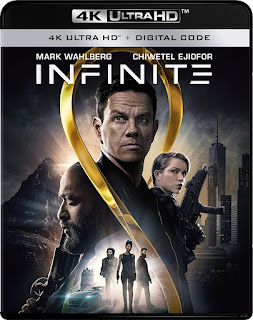 Right off the bat, Infinite makes the near fatal narrative mistake of laying-out the entire premise during Mark Wahlberg’s introductory voiceover.

That premise: There are hundreds of repeatedly-reincarnated people on Earth called Infinites, who fully remember all of their past lives, retaining their growing set of skills from one life to another. One group of them, the Believers, are sort of like guardians who use their abilities to try and improve the world. Conversely, the Nihilists - sick of living forever - are hellbent on destroying all life, thus ending their torment.

However, Evan McCauley (Wahlberg) has mental issues which keep him from remembering anything, so he wonders why he’s such a skilled fighter and swordsman. Because of the opening exposition, the audience is already 100% certain he’s not-only a Believer, but a huge part of the film will likely focus on Evan discovering who he really is. In the meantime, he’s pursued by Bathurst (Chiwetel Ejiofor), a former friend from a previous life who’s now a Nihilist. Evan is rescued by a group of Believers who hope to jog his memory because it turns out he was once known as Treadway, who hid a device called the Egg, containing a virus that’ll wipe out all life on Earth. Needless to say, both sides want to retrieve the Egg for different reasons.

Had the viewer been allowed to discover what’s going on right-along with Evan, Infinite would have at least held a surprise or two. Instead, we simply watch the premise play itself out, with a lot of Matrix-style flash and action that might have been impressive 20 years ago, but is now perfunctory. Storywise, the hunt for the Egg isn’t all that interesting, nor are the people seeking it, most of whom are also similar to characters from The Matrix. As the film’s “Neo,” Wahlberg pretty much plays the same guy he always does…Mark Wahlberg, which ain’t necessarily a bad thing since he’s always been a reliable action hero. Ejiofor, on the other hand, is wasted as your standard-issue manic bad guy bent on destroying the world.

Breathlessly paced, Infinite features plenty of chases, fighting, gunplay and destruction, all presented with slick professionalism. But we’ve seen it all before, and because it spoon-feeds the entire premise almost immediately, there aren’t any real narrative surprises. That might make it a passable time-killer on Paramount+ (where Infinite first premiered), but I can’t imagine anyone ever being compelled to visit this forgettable film a second time.