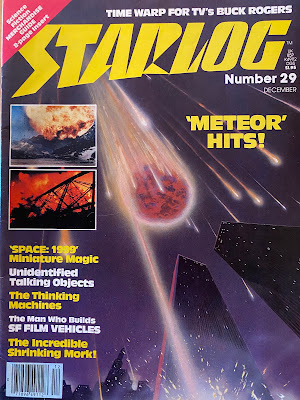 In addition to watching and writing about films, I’ve become something of a memorabilia collector in recent years. Cursed with a teacher’s salary, I ain’t out there bidding on Dorothy’s ruby slippers or anything, but certainly enjoy haunting local antique stores for a variety of movie-related stuff. Or when feeling particularly bold, I’ll occasionally overpay for a retro relic on eBay.

For the first installment of Cinemantiquing, I’m sharing an old issue of Starlog, a magazine that was popular in the late 1970s and covered sci-fi related movies & TV shows. Like many fan-centric journals of the era, Starlog featured fluffy articles and soft-pitch interviews ballyhooing current or upcoming films, but never in all that much depth and nary a negative word to say about anything or anyone related to the production. For studios, Starlog was just as much a promotional tool as a magazine. To everyone else, it was Teen Beat for nerds.

The December 1979 issue featured a cover story about the post-production of Meteor, American-International Pictures’ entry in the disaster movie sweepstakes. Though I didn’t often buy Starlog as a kid - I was more of a Fangoria man - this issue was of particular interest because disaster was my favorite genre, even though its popularity was waning at the time. So I did snap up this particular issue back then, which certainly boosted my anticipation of the film.

The first of two articles dedicated to Meteor gushed its praises in the very first paragraph, touting it as “the disaster epic to end all disaster epics!” In hindsight, author David Houston was partially correct, but not quite the way AIP had hoped. Meteor was a costly, colossal flop that nearly sank the studio and, along with such other dubious disasters as The Concorde: Airport ‘79, pretty much put an end to Hollywood’s infatuation with big-budget disaster movies.

Not to delve too much into the film itself, but Meteor turned out to be a cheap-looking B-movie loaded with eye-rolling dialogue, a tired cast, laughable special effects and stock footage (you can read more of my opinion HERE).

As if rubbing salt in an open wound, this issue hit shelves as the film was already dying in theaters. 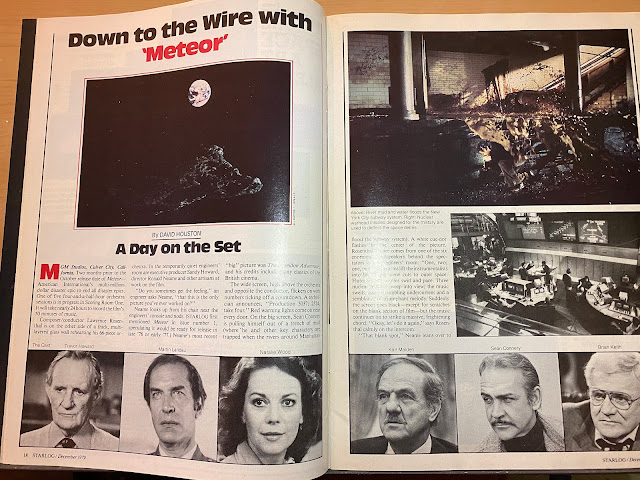 What makes the Meteor features in this issue so amusing - and somewhat poignant - 43 years later is the boundless optimism that practically jumps off the pages, from the magazine’s writers and those they interviewed. Everyone - including director Ronald Neame, composer Lawrence Rosenthal and editor Carl Kress - seemed certain they had a blockbuster on their hands.

The other article begins by trumpeting that Meteor “cost nearly $20 million to produce” and contains “numerous special effects sequences the likes of which have not been crowded into a single motion picture since When Worlds Collide.” According to producer Ted Parvin, several FX crews were fired before finding someone who was up to the ask. Considering how cheesy everything turned out, just how bad were the special effects by the people he let go? Did they submit footage of Legos and yo-yo string?

After re-reading these pieces, I kinda felt sorry for everyone interviewed, and pictured them shuffling out of the theater after the premiere, leads drooping dejectedly like a kid whose bike was just stolen. Sure, part of their job - as well as Starlog’s writers - was to talk-up Meteor as much as possible, but I have the impression that, however briefly, they genuinely thought they were making a great film.

Elsewhere in this issue were features on Mork & Mindy, Space: 1999 and a guy who built futuristic cars for movies. But other than a nifty color photo of Buck Rogers’ Erin Gray (definitely one of sci-fi’s MILFs back then), I didn’t delve much further, content to slip the magazine back into its protective plastic bag and stick it on a shelf. Still, for only five bucks, it was a pleasant trip down memory lane.