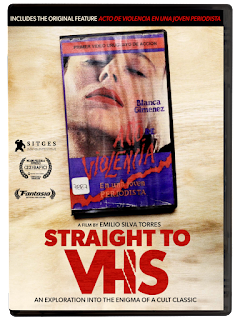 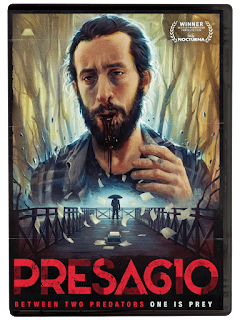 Both of these horror-tinged films hail from Argentina. One takes an unusual approach to blending fact and fiction, though a questionable shift in style and tone lessens its overall effectiveness. The other is an earnest attempt at psychological horror, but ultimately undone by its dull approach to an overused concept.

Part documentary, part mockumentary, Straight to VHS starts off great, with footage from an actual micro budget feature film, Act of Violence in a Young Journalist, which was shot and released on VHS in 1988. Amateurish and nonsensical, the film nevertheless earned something of a cult following. One of its disciples is the narrator, who begins a quest to locate the director, Manuel Lamas. Finding him turns out to be a difficult task. Nobody who worked on the film is willing to come forward, while assorted other acquaintances paint Lamas as a narcissist whose ego far outweighed any filmmaking talent.

For awhile, it’s an interesting journey, even as we begin to suspect we aren’t watching a documentary in the purest sense. If that’s indeed the case, kudos to writer-director Emilio Silva Torres for creating the most convincing mockumentary since This is Spinal Tap. Then inexplicably, the film completely shifts aesthetic and tonal gears by focusing on the narrator himself. Suddenly secluded in a remote cabin, he experiences Lamas-related, quasi-supernatural hallucinations, which results in him burning all of his research. These scenes - while well done - seem to belong to another movie and negate any pretense of authenticity. But overall, Straight to VHS remains watchable. The same can’t be said for the film that inspired it. Offered as a bonus feature, Act of Violence in a Young Journalist is a strong candidate for the most insufferable film of all time (I made it about a half-hour before I couldn’t take anymore).

Camilo (Javer Solis) is a writer who still hasn’t gotten over the deaths of his wife and kid from a recent car crash. For a time afterwards, he is unable to write and is becoming increasingly withdrawn. But when he retreats to his beach house, Camilo is tormented by a mysterious man carrying an umbrella. We never see his face, but from a distance, the man compels Camilo to write his next book…a story of an obsessive hunter that appears to be a metaphor for Camilo’s sorrow (or guilt). He’s also haunted by disturbing, dreamlike visions, some related to his wife, others which suggest a demonic presence.

Much of this is presented in flashback, as told by Camilo to his skeptical shrink (Carlos Piñero). Unfortunately, the audience is just as skeptical...almost right from the get-go. Despite a few effectively creepy moments, Presagio is slow and seldom very involving, with writer-director Matías Salinas treading such familiar ground that the viewer knows where he’s going long before he gets there. And even after all the narrative cards have been played, the resolution is needlessly - almost ridiculously - protracted. Thin characters and rote performances only exacerbate the film's shortcomings.