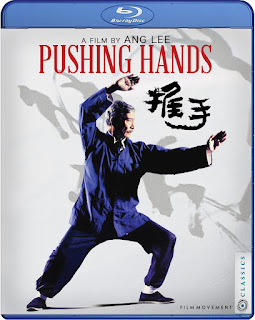 I should be upfront and say my experience with Ang Lee began with Crouching Tiger, Hidden Dragon, which I enjoyed, though more for its technical aspects and fight choreography than the characters or story. I know he’s made a few critically praised dramas since then, but it seems like he's growing increasingly enamored with tech-toys and special effects, rather than telling a compelling story.

I should be equally upfront and confess never having seen any of Lee’s early films, including his first, Pushing Hands (named for a move practiced in various martial arts disciplines). After seeing it, one thing was obvious…before he got all wrapped up in provocative subjects or pushing the limits of CGI, Lee relied on authentic characters and humanistic stories.

To draw a comparison to George Lucas, if Crouching Tiger is Ang Lee’s Star Wars, then Pushing Hands could be considered his American Graffiti…an episodic, character-driven and layered film that feels drawn from personal experience. Whether or not any of the story is actually autobiographical isn’t really important. What does matter are its characters and themes. As such, I think most of us have gone through moments when we feel alienated from those around us, or had a relationship deteriorate because of an inability - or unwillingness - to communicate constructively. Those of a certain age might relate to the ageism that one main character is repeatedly subjected to.

The story centers primarily around Chu (Sihung Lung), an elderly Chinese martial arts master forced to move to New York to live with his son, Alex (Bo Z. Wang), American daughter-in-law Martha (Deb Stover) and grandson Jeremy (Haan Lee). He doesn’t speak English and Martha doesn’t speak Chinese, so when we first meet them, their relationship is already strained. Steadfast in his old ways and annoying habits, Chu makes it difficult for Martha to focus on finishing her novel. He’s also befuddled by American customs and is concerned at how Jeremy is being raised so informally. Conversely, Martha grows to resent Chu’s presence, which puts strains on her marriage, since Alex feels fiercely obligated to take care of his father (quite the opposite of the decidedly American tendency to marginalize its elders).

The film isn’t as dour as I’ve described it. Though sometimes somber in tone - with a few emotionally distressing moments - Pushing Hands keeps things fairly light, even funny on occasion. There are times throughout the film where we dislike each of the three leads, only to completely sympathize with them later, for different reasons. This is especially true with Chu. His demeanor and habits are irritating within the first few minutes after meeting him, exacerbated by his meddling in Martha’s parental decisions. However, the more we know him, the more endearing he becomes, especially once he meets Chen (Wang Lai), a similarly-widowed cooking instructor. Overall, these relationships - and how they fluctuate - feel real, as does the cultural barrier that often hampers real communication. The only thread that rings false is a ludicrous scene which has Chu using his kung fu skills to dispatch an abusive restaurant manager and a crew of young thugs, becoming a local hero in the process. The whole sequence completely belies the tone Lee has worked so hard to establish thus far.

But despite its conflicts, Pushing Hands is ultimately an unassuming, sweet-natured film with a lot of empathy for its subjects, which is more than I can say for much of Ang Lee’s later work. Perhaps a little too deliberately paced and episodic for repeated viewings, it’s certainly worth checking out at least once, if only to confirm that Lee once favored characters over camera tricks.