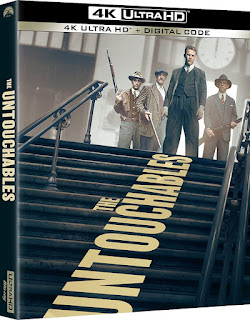 Revisiting The Untouchables for the first time in years had me thinking about director Brian De Palma's long, varied and wildly inconsistent career. There are the definite highs (Carrie), the lows (The Bonfire of the Vanities), the underrated (The Fury), the overrated (Scarface), the blockbusters (Mission: Impossible) and the bombs (pretty much everything of the past 20 years).

But even taking the films approaching artistry (Blow Out, Carlito’s Way) into account, I’ve concluded that 1987’s The Untouchables is probably De Palma’s best. Watching it with fresh eyes - aided by a damn fine 4K transfer - is a reminder that he was the perfect director to resurrect such an iconic brand name. In the process, with considerable help on both sides of the camera, he created the quintessential De Palma film. Consider this…

In this writer’s opinion, The Untouchables showcases Brian De Palma at the peak of his powers (though he didn’t do it alone). Does it rank among the greatest gangster films ever made? That’s debatable, but it’s certainly one of the best to emerge from the ‘80s. Almost awesome in its simplicity, the film is a classic marriage of epic storytelling and the director’s visual flair (minus his trademark voyeurism, of course). This 4K UHD disc offers excellent picture & sound, though the bonus features, while fairly extensive, are all carried over from previous DVD/Blu-ray releases.

FEATURETTES - “The Script, The Cast”; “Production Stories”; “Re-Inventing the Genre”; “The Classic”; “The Men.”