GIRLS NITE OUT and the Undemanding '80s 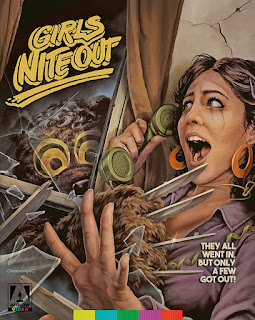 GIRLS NITE OUT (aka The Scaremaker) (Blu-ray Review)
1982 / 97 min
FROM ARROW VIDEO
Review by Josey, the Sudden Cat🙀

In the ‘80s, the easiest way to break into the movie business was to make a slasher film. Not only was there a huge demand in the wake of Friday the 13th and Halloween, they were cheap to make and easy to market. You didn’t need a big star or unique concept…just plenty of slicing & dicing, mostly of young people (the genre’s primary audience).

But for every Prom Night or My Bloody Valentine, there are films like Girls Nite Out, a barely released obscurity that never had a chance to earn a cult following. Not that it deserves one, mind you. Laughably derivative, there’s almost nothing to differentiate this one from countless other low budget slashers cranked out by would-be mini-moguls driven more by the prospect of profit than creativity (in this case, a couple of lawyers hoping to get a slice of the pie).

Still, Girls Nite Out is not without a bit of historic interest. It is so indicative of second-tier ‘80s slasher flicks that one gets a good feel for what was typically spoon-fed to undemanding teenagers at drive-ins and multiplexes (as well as filling the horror sections of video stores). In a way, the review you’re currently reading could apply to dozens of other cheap slasher films. On the other hand, those films don’t have Hal Holbrook showing up for a few days’ work and, according to the essay in this disc’s supplemental booklet, claiming the script was better than the one he read for The Fog.

There’s also cult heroine Rutanya Alda and hubby Richard Bright (Pacino’s right-hand man in The Godfather). But none of these familiar faces pop up that often. The main characters are a bunch of college kids - and I mean a bunch - lining up for slaughter by a guy in a bear suit. Typically, most of the victims are women, who are repeatedly called ‘bitch’ and ‘whore’ as they’re attacked (misogyny was an accusation often leveled at these films, an argument Girls Nite Out certainly can’t refute). None of the male characters serve any real purpose. They are either hunky douchebags, cringy comic relief or Holbrook earning a paycheck, but at no time do any of them significantly participate in the story.

There is one unique element that may or may not have had an influence on horror films to come. The killer’s weapon of choice is a row of steak knives extending from one of the costume’s paws. Did this later inspire Wes Craven to endow his own Freddy Krueger with similar appendages? Okay, that’s probably a stretch, but the fact remains that Girls Nite Out did it first…and pretty effectively, I might add.

Elsewhere, the film takes a looong time to get going, the first half introducing so many characters that we have a difficult time keeping track of who’s who. The “wild” college party, in particular, is embarrassingly bad. Not only do the actors look too old for their roles, the characters are terribly written, as if penned by a middle-aged man who thinks he knows how young adults behave, but is ultimately clueless. But those aspects are also typical of most slasher films from the era.

One could compare Girls Nite Out and its ilk to the low-budget oaters of the ‘50s, prolifically cranked out to placate the demand for westerns. Not the content, obviously, but the rationale behind this and countless other slasher films. For Blu-ray, Arrow Video does its best to restore this one, though a pre-title card informs us that “no pre-print materials could be located,” which essentially means that some of the images are worn beyond repair. However, Arrow compensates with some terrific interviews featuring some of the primary cast. Their enthusiastic recollections and anecdotes are easily the best reason to check-out the disc, especially since most of them have no illusions over the quality of the finished product, but certainly had a good time making it.

INTERVIEWS - The best of the bonus features, these lengthy interviews with various cast members are wonderfully entertaining: “Staying Alive” (actor Julia Montgomery)”; “A Savage Mauling” (actor Laura Summer); “Along in the Dark” (actor Lois Robbins); “It Was a Party!” (actor Paul Christie); “Love & Death” (actors Lauren-Marie Taylor & John Didrichsen, who met while auditioning and got married after filming wrapped).

ALTERNATE TITLE CARD - When it was released as The Scaremaker.