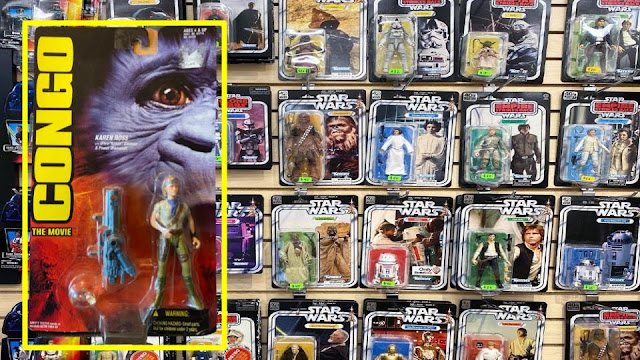 In addition to watching and writing about films, I’ve become something of a memorabilia collector in recent years. Cursed with a teacher’s salary, I ain’t out there bidding on Dorothy’s ruby slippers or anything, but certainly enjoy haunting local antique stores for a variety of movie-related stuff. Or when feeling particularly bold, I’ll occasionally overpay for some retro relic on eBay. 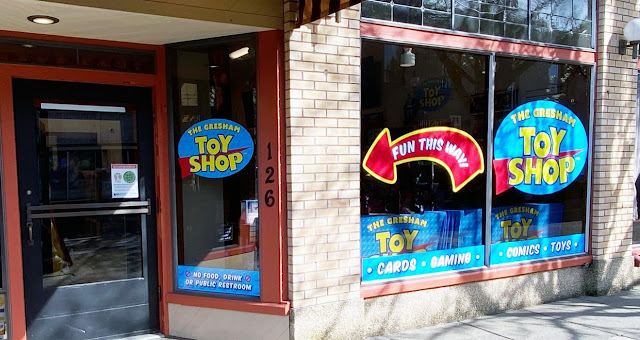 There’s a small boutique store near my house called The Gresham Toy Shop. I usually pop in there about once a month, often leaving without buying anything. Most of it tends to be stuff I have no interest in…Pokemon, Marvel and Star Wars merchandise. If you’ve ever been to virtually any antique store, you’d know they’re chock full of old Star Wars related toys acquired from ex-nerds who thought their action figures and Landspeeders would now be worth a fortune. For all I know, some of them are, but the fact remains you can pretty much find that shit anywhere.What's the fun in that?

The Gresham Toy Shop isn’t quite an antique store, but the owner obviously does his share of buying and selling, and when he’s not wheeling and dealing Pokemon cards, he occasionally acquires old toys related to films that are comparatively obscure (at least to anyone who's regularly carded when buying beer). During a recent visit, I found an action figure from the 1995 film Congo. 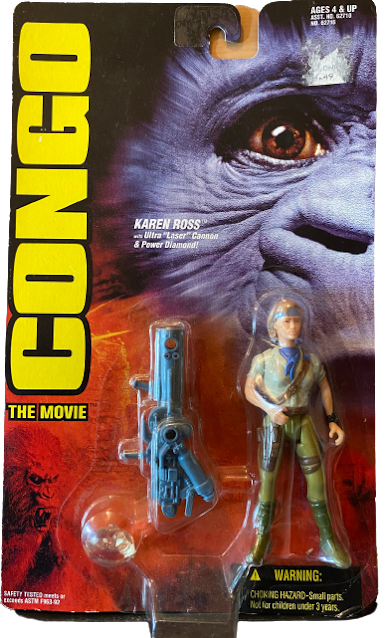 Based on a novel by the late, great titan of tech-terror, Michael Crichton, Congo was to ‘90s science-fiction what Con Air was to ‘90s action…not particularly good but a ton of ridiculous fun. The film had it all: a talking gorilla, an ancient diamond mine, lost cities, killer hippos, murderous monkeys, hot air balloons, volcanic eruptions, laser guns and Tim Curry…all wrapped up in a breathlessly-paced package that you couldn’t help but watch with a perpetual shit-eating grin.

I’m still trying to wrap my head around the fact the ‘90s were three decades ago. Con Air has achieved such a level of cult kitschiness that it’s remained somewhat culturally relevant (and embraced by Nic Cage fans as his magnum opus). Congo, on the other hand, was left behind in the decade from which it sprang, as has the line of tie-in toys that, until today, I didn’t know Kenner bothered to produce. The Karen Ross action figure sitting atop Gresham Toy Shop’s counter was a genuine antique (and unique among the legion of Transformers on display). I don’t know how Laura Linney - who played her in the film - would feel about that, but actually having seen the film in theaters, I felt absolutely ancient (especially since Linney herself is my age).

Save for Herkermer Homolka (wonderfully overplayed by Tim Curry), Congo doesn’t feature any particularly memorable characters, so I don’t remember much about Karen Ross. I do know that the action figure looks more like Colin Farrell than Laura Linney, but at least she comes equipped with a laser cannon. That, coupled with the relative obscurity of both the movie and the toy, certainly made the thing worth ten bucks. The owner tried to get fifteen out of me, but sorry, it ain’t like he had one of the movie’s killer hippos for sale (I’d have paid twenty for one of those).
Posted by D.M. Anderson at 2:14 PM