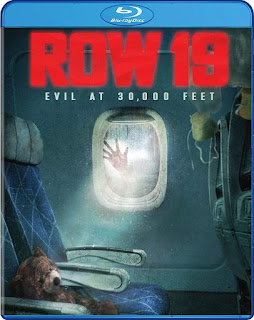 Inherent challenges accompany any horror movie set entirely on-board an airplane. Passenger jets aren’t exactly dripping with atmosphere to begin with, no matter how creative one is with lighting and camera angles. And narratively, there’s only so much you can do within such a confined setting without becoming rote.

But it ain’t impossible. After all, one of The Twilight Zone’s greatest episodes, “Nightmare at 20,000 Feet” remains a high tension masterpiece (even with William Shatner’s histrionics). Then again, it was only 25 minutes long. Can you imagine if it was stretched to feature length? That’s way more Shatner than the Surgeon General recommends.

A Russian horror effort, Row 19 has the kind of story Rod Serling might have concocted, including a twist ending similar to those he was famous for. But while the film certainly has its creepy moments, it does feel unnecessarily padded out, even with a scant 78 minute running time.

The story opens with a plane crash that kills everyone but Katerina (Svetlana Ivanova), a little girl flying with her mother. Twenty years later, she’s a successful psychologist and facing her fears by flying for the first time since the crash, this time with a daughter of her own, Diana (Marta Kessler). There are only a few other passengers and the film takes the time to introduce them all, including a couple of strangely behaving flight attendants.

Once in the air, bizarre things begin happening. A few passengers die horribly, such as one man who somehow manages to burn himself alive. Meanwhile, Katerina sees dark, monstrous apparitions lurking among the seats. Also included are a couple of flashback sequences related to her childhood…which do end up being relevant to the story. Some of the scare scenes are highly effective, the best one featuring dozens of bloodied hands clawing at the windows from outside the plane.

But despite a decent twist ending, Row 19 takes a lot longer than necessary getting to the point, which tends to make the denouement somewhat underwhelming. The first act, in particular, is way too pokey. Considering the low-budget - and questionable CGI at times - the film is pretty well made and watchable. It just might have packed more punch as a short subject.