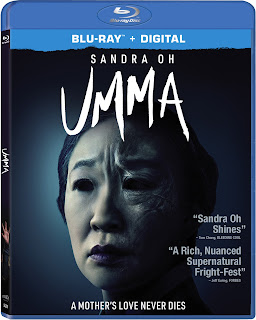 Despite bringing absolutely nothing new to the table, Umma is saved by two things. First, the short running time keeps it from overstaying its welcome. Second, and more importantly, Sandra Oh’s performance makes the non-stop parade of familiar horror tropes endurable.

Oh plays Amanda, a single mom with a serious fear of electricity, the result of childhood abuse by her own mother (aka Umma...Korean for 'mom'). She and teenage daughter Chris (Fivel Stewart) live a semi-reclusive life as beekeepers, their farm and house free of any powered device or object. Even their lone frequent visitor, local store owner Danny (Dermot Mulroney), is asked to shut-off his car and cellphone before coming onto the property. Though loving and respectful to her mother, Chris has a pent-up desire to experience the outside world by going away to college.

One day, her uncle from Korea arrives to inform Amanda that her mother has died, bringing along a suitcase with her ashes and a few - apparently sacred - possessions. It doesn’t take a psychic to figure out what happens next. Umma begins appearing throughout the house - mostly at night - serving up enough Insidious-inspired jump-scares for three movies. Amanda’s change in behavior has Chris suspecting not all is right with mom. Of course, those suspicions are confirmed as Amanda becomes possessed by Umma, who’s hell-bent on keeping the three of them together.

Despite an over-reliance on simple scare tactics - particularly during the first half - the basic narrative is light on shocks or surprises, following the vengeful spirit playbook pretty closely without throwing in any new moves of its own. But even though most horror fans will know exactly what lurks in every dark room or doorway, the film is tightly paced and doesn’t prolong the inevitable.

However, it’s ultimately Sandra Oh who keeps Umma interesting, instilling Amanda -  tormented by generational trauma - with equal measures of vulnerability and resolve. Her dedicated performance is easily the best part of the film, which is otherwise an assembly-line ghost story…efficiently directed and certainly watchable, but nothing that’s likely to stick with the viewer very long afterwards.