DOG: Not the Usual Animal Antics 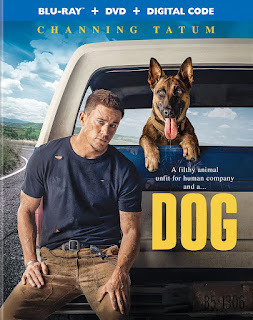 The trailer for Dog is pretty misleading, painting the film as a family comedy loaded with slapstick and a beleaguered human serving as the straight man to an endearingly mischievous canine. But I get it…the movie as-is would be a hard sell, since its underlying themes are pretty somber. While there are many funny moments - and some broad physical gags - Dog is leisurely paced and shares more similarities with Harry and Tonto than Beethoven. And that’s okay. After all…how many destructive dog comedies do we really need?

Channing Tatum (who also co-directs) plays Jackson Briggs, as ex-Army Ranger suffering from PTSD following stints in the Middle East. He desperately wants to get back to active duty, but his commanding officer refuses to clear him. However, after fellow Ranger and friend Riley dies, Briggs is offered the opportunity to return to duty if he agrees to escort Riley’s dog, Lulu, to the funeral. Lulu was also in Pakistan as part of the squad, but since adjusting to life after combat is unlikely, she will be euthanized afterwards. It’s a long road trip from Fort Lewis in Washington to the funeral in Arizona, during which time we expect hilarity to ensue.

That road trip comprises the bulk of the episodic narrative, and while their adventures are sometimes amusing, it’s a surprisingly poignant, introspective journey. Sure, we get the usual dog from hell vs. exasperated master tropes, but the film establishes that both characters are dealing with psychological trauma. Even the most overtly-slapstick scene has dark underpinnings, when Lulu’s military training results in her attacking a Middle Eastern man in a hotel lobby.

Though it has no impact on the overall story, Dog features a satiric aside that I personally found very funny. Early during the trip, Briggs & Lulu drive through Portland, Oregon (my hometown), where Briggs stops to hit a few bars (and maybe get lucky). Instead, everyone he meets is either a pretentious, bearded hipster, a new-age guru or a paranoid pot farmer. It’s all exaggerated, of course, but not entirely inaccurate. Still, one suspects Tatum and writer/co-director Reid Carolin may not hold Stumptown in the highest regard. But that’s okay, guys…I felt the same way about 22 Jump Street.

Elsewhere, Tatum is…well, Channing Tatum, and he makes a likable protagonist without exerting a lot of effort. Lulu (played by three different dogs) is a charmer, even though she’s been conditioned to kill and her constant anxiety has us concerned for her well-being. Speaking of which…Dog is decidedly not a kids’ movie, despite what its trailer suggests. In addition to alcohol and drug use - as well as a cop (comedian Bill Burr) who displays some unnerving racism - the film deals with serious adult themes alongside the animal antics. However, those same themes are part of what makes Briggs and Lulu’s growing trust in each other more resonant. Dog may not always resemble the amiable family comedy we signed up for, but for patient viewers, the journey is fairly rewarding.